From the structure of genes to chromosomal arrangements, we could suspect that genome organization plays a fundamental role in evolution and regulation of the molecular functions. With the recent accumulation of genomic data, an incredible number of patterns (distribution of introns, distribution of transposable elements, length of UTRs, gene clustering, transcriptional domains, etc...) have been suggested to be influenced by genome organization. However, little is known on the evolutionary forces (adaptation, random processes, constraints, etc...) that shape and maintain these patterns. I am particularly interested in the evolution of UTRs and introns.
Gene expression is generally treated as a quantitative phenotype and quantitative genetics approaches have been used to extract components of variance (additivity, dominance, and epistasis) and to answer basic questions on its heritability. Despite its efficiency, quantitative genetics is a "black box" approach and it rarely allows one to dissect the mechanisms of evolution and regulation of gene expression. On the other hand, estimating allelic expression permits a direct inference of the additivity or the dominance of an allele. Allelic measurements also permits one to study and quantify the main type of regulation for a particular gene (cis- versus trans-regulation). The recent sophistication of high throughput sequencing methods has opened a new era for gene expression studies, by allowing the quantification of allelic expression at the level of a whole transcriptome. My particular focus is on the evolution of gene expression in germlines.

1994 - 1996
Studies in Biology and Environment at University of Corsica (Corte), France.

1991 - 1993
Studies in Agribusiness and Biotechnology at University of Limoges, France. 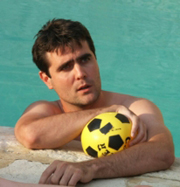