Senescence is an interesting and complex phenomenon. The mechanisms guiding the evolution and persistence of senescence exist for a variety of reasons, most of which are still poorly understood. Lifespan between individuals can change widely within a species, suggesting possible genetic and environmental implications.

Telomeres are tandem repeats of G-rich DNA sequences that form the distinctive and functional caps that protect the ends of eukaryotic chromosomes. Telomere dynamics refers to either the elongation or the shortening of the telomeric DNA. Shortening of telomeric DNA occurs mostly from the “end replication problem” but mostly through damage caused by oxidative stress. Elongation of the telomeres is possible with the help of a ribonucleoprotein enzyme, telomerase, which synthesizes the telomeric DNA.

2009
PhD student in the group of Dr. Pierre Bize at the University of Lausanne, Switzerland.
Project tittle: Telomere dynamics in the Alpine Swift (Apus melba).

2002-2006
Bsc. In Environmental Studies with a concentration in Conservation Biology from the University of Maine. 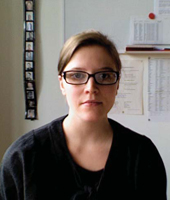