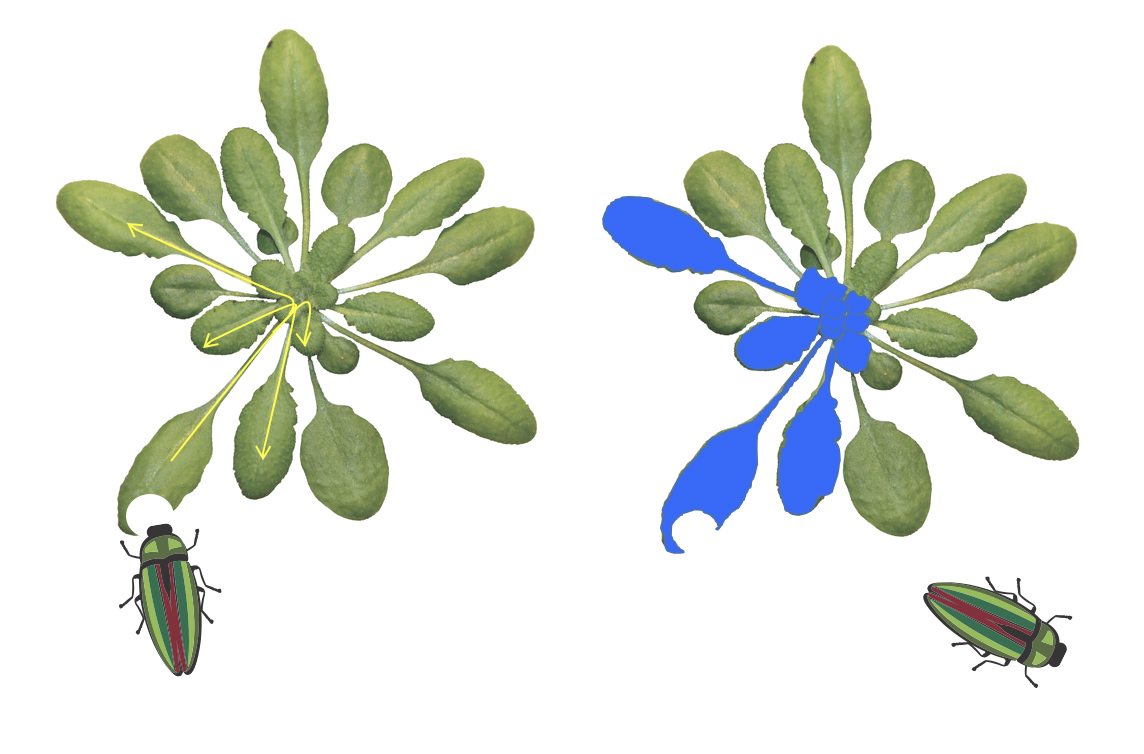 The approximately 500 gigatons of carbon in living terrestrial vegetation is potentially valuable food for animals, however, most living plant mass remains uneaten in nature. Our research aims to understand why this is and, specifically, how plants defend themselves. We discovered that a lipid-derived signal, jasmonate, controls antiherbivore defence responses and limits the activity of detritivores. The jasmonate pathway operates at a major nexus in the carbon cycle, limiting carbon flow from both living and dead plants to higher trophic levels. The laboratory uses genetic and electrophysiological techniques to study jasmonate pathway activation.

We focus on plant defense activation in the seconds following wounding. This involves electrical signals known as slow wave potentials (SWPs) that powerfully activate jasmonate synthesis in xylem cell niches. The goal is to understand how these signals are generated, propagated and decoded. A genetic understanding of leaf-to-leaf electrical signals in plants has long eluded researchers. This is now changing with the identification of several key genes through research ongoing in our laboratory.

NEW: A review highlighting progress in uncovering the genetic basis of electrical signalling in plants :  Here.

THE ORIGIN OF WOUND-INDUCED LEAF MOVEMENTS

Only a few plants including the ‘sensitive plant’ Mimosa pudica display striking leaf movements when touched or wounded. These movements are triggered by electrical signals. Using quantitative force probes we detected minute petiole deformations in the order of twice the length of E. coli cells in wounded Arabidopsis. These deformations, which were invisible to the naked eye, correlated with the architecture of the slow wave potential and suggested that selection forces have acted on similar tiny movements to allow the evolution of Mimosa pudica’s spectacular leaf movements (PNAS 116, 26066).

We developed the first assays that showed that wound-induced plant growth restriction was jasmonate-dependent (Plant Cell 19, 2470) and later found a mechanism that slows the growth of roots when shoots are wounded (PNAS 110, 15473). More recently, we have investigated the role of jasmonate in the art of bonsai (Plant Physiol. 184, 1172).

In response to wounding, jasmonates can be made within and proximal to wounds and also in distal tissues. Jasmonate synthesis can be activated by long distance wound signals other than mobile jasmonates. The nature of these signals has long been a mystery.

We found that the first burst of jasmonate made in leaves distal to wounds in Arabidopsis originates from the activity of LOX6, an enzyme localized to xylem contact cells (New Phytol. 197, 566).

In 2018 we discovered that two non-adjacent vascular cell types (xylem contact cells and phloem sieve elements) are necessary for the transmission of electrical signals from leaf to leaf (PNAS 115, 10178). Interestingly, endomembranes within these cells are implicated in controlling the ion fluxes underlying the electrical signals and this is consistent with other results from genetics studies (New Phytol. 216, 1161).

Using irregular xylem mutants we found that xylem cell wall integrity determined not only the architecture but also the velocity of slow wave potentials. These results (PNAS 116, 26066) are consistent with the xylem carrying elicitors of contact cell depolarization, an event we think underlies slow wave potential transmission.

In 2020 we published a model integrating the roles of both the xylem and phloem in slow wav potential progagation (New Phytol. 227:1037). Current research in the lab is based on challenging this model.

Performed the first experiments to investigate the effects of a signal transduction pathway on the feeding behavior of a vertebrate herbivore (Mol. Ecol. 21, 2534-2541).

We showed that wound-response leaf growth restriction is mediated by the jasmonate pathway (Plant Cell 19, 2470).

When leaves are wounded the aerial growth of plants is reduced. We showed how root growth in these plants is controlled genetically so that reduced growth of stems is balanced by reduced root growth (PNAS 110, 15473).

Co-discovered (in parallel with the goups of J. Browse and R. Solano) members of the 'JAZ' family of repressor proteins and shown that a natural transcript from JAS1/JAZ10 plays a role in wound-induced growth inhbition. Also descibed the 'Jas' motif as a functional element in this protein (Plant Cell 19, 2470).

Showed that monogalactosyldiacylglyerol (MGDG) is a likely in vivo substrate for jasmonate synthesis (PNAS 94, 10473).

Quantitated (using microarrays and statistical analysis) the number of chewing insect-inducible genes that are regulated throught the jasmonate signal pathway (an estimated 67-84%) (Plant Cell 16, 3132) and shown that a specialist and a generalist insect activate this pathway almost equally.

Showed that jasmonate signalling promotes the establishment of an oxidising environment near a wound (Plant Physiol. 156, 1797).

We showed that endogenous jasmonate can move axially and radially from cell to cell in plants (Plant Physiol. 169, 2244).

Tissues in which there is a high production of ROS (e.g. retina, neurons, thylakoids etc.) are particularly rich in oxidation-sensitive polyunsaturated fatty acids (PUFAs). At the subcellular level the membranes with the highest PUFA levels are often found where ROS are produced (e.g. mitochondria and chloroplasts).Why is this? Using genetic approaches we found that polyunsaturated fatty acids have roles as sinks for ROS. That is, membranes rich in these fatty acids can now be regarded as supramolecular antioxidants (J. Biol. Chem. 284, 1702; Ann. Rev. Plant Biol. 64, 429).

Proposed that 'reactive electrophile species' (RES) could play roles in abiotic stress responses and in the 'abiotic component' of biotic attack in plants (Plant J. 24, 467; Nature 411, 854).

Developed a whole-body malondialdehyde mapping technique for the in situ visualization of MDA in complex organisms (J. Biol. Chem. 202, 35749) and discovered inducible pools of MDA in stem cell-rich tissues including the pericycle (J. Biol. Chem. 287, 8954-8962).

Remorin: a new family of proteins

Discovered the remorin group of plasma membrane proteins (PNAS 86, 1539; Plant Cell 8, 2265). 'Remorins may be associated with the cytoskeleton or membrane skeleton i.e., in superstructures that help determine cell integrity and/or act as scaffolds for signaling in defense or development' (Plant Mol. Biol. 55, 579).

Oxylipins control a major biological transition: from detritivory to herbivory

Evolution from detritivory (feeding on dead tissues) to herbivory (feeding on living plants) is one of the major transitions in biology. We starved isopod crustaceans (detritivores) and let them loose on Arabidopsis and rice mutants in jasmonate synthesis. The isopods started to feed on the living mutant plants but rarely damaged the WT. This shows that the absence of a signal pathway (the jasmonate pathway) in one organism causes a profound (transitional) effect on feeding in another (PNAS 106, 935).

Why do herbivores often cut round holes in leaves?

Now and again some of the things one finds changes the way one looks at nature. Herbivores often cut highly regular circles and semi-circles of leaf tissue. Birds often use the light coming through these holes to help them find caterpillars. In part the fact that insects often cut clean circles in leaves can be explained because it is simple and 'mechanically economic' (the insect doesn't have to move much) to do this. But there is more to the story : In carefully analysing microarray data we saw that some herbivores probably try to extract the maximum area of leaf tissue while leaving the minimal length of cut edge, so as to minimise stimulating plant defenses Plant Cell 12, 707). Perhaps insects understand calculus.

Good candidates for low molecular mass antibiotics (phytoalexins) from the leaves of the historically and commercially important plant potato were unknown. They turned out to be relatively unstable molecules that had been described in vitro but that had previously escaped detection in living organisms. We identified divinyl ether fatty acids for the first time in nature in these leaves and proposed a role as antimicrobial compounds (Plant Cell 11, 485). They are the best candidates for the long-lost phytoalexins in potato leaves, the primary infection site for potato blight.

Our laboratory has strongly supported the development of central, shared community resources in molecular biology and played a role in the establishment of the Lausanne DNA Array Facility. 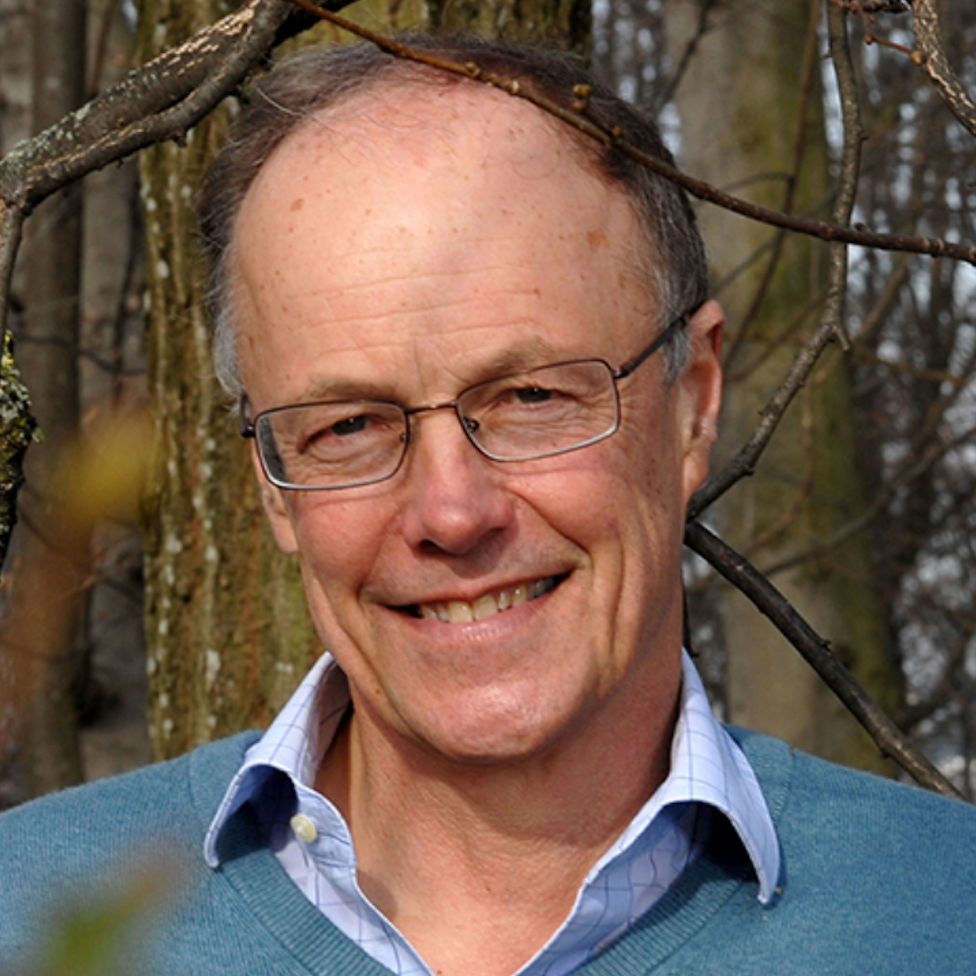