Alexander completed his PhD in our group in 2006. He is now a postdoc at UBC, Canada in the group of Prof. John Klironomos. He can be contacted at: akoch13[@]gmail.com

I am mainly interested in topics of evolution, population genetics, mutualistic and parasitic interactions. My research started with a project on the parasitic plant Cuscuta campestris (field dodder), where I studied the effects of age and size of the host Trifolium resupinatum on the plant growth of the parasite. For my diploma thesis I continued the work with Cuscuta and performed two experiments. The first experiment was to study the resource acquisition patterns of the parasite when it was growing on two host species which offered different benefits to the parasite. In the second experiment I studied randomly samples Cuscuta individuals from one population to test whether they were phenotypically different.

After my diploma project I decided to "switch" from the plant parasite Cuscuta to the mutualistic arbuscular mycorrhizal fungi (AMF). This peculiar group of soil fungi have many intriguing and interesting features. They are thought to be a monophyletic clade (Glomeromycota) which is believed to be very old and to have evolved asexually. AMF form a mutualistic symbiosis with plant roots where the typical fungal structure in the root cortex is called arbuscule. This is the place where an exchange of nutrients occurs. As the fungi are obligate biotrophs and need to recieve carbohydrates from a host plant in order to grow and reproduce. In return AMF supply the plant with mineral nutrients and especially phosphorous, which is often a limiting resource for plant growth. However AMF can also give other benefits to the plant, such as protection to stresses such as heavy metals, draught or root pathogens.

AMF produce spores which are multinucleate. The hyphae of AMF are coenocytic, that means there are no septae like in other fungi and the hyphae are comparable to a network of interconnected hollow tubes which contain many nuclei. This means that the reproduction of these fungi is quite different from most other "normal" higher organisms where soma (vegetative cells) and germline (cells that will produce gametes) are well separated. The progeny of a single AMF spore (which we consider as a single spore isolate, or an "individual") which includes all fungal structures (such as hyphae, spores, arbuscultes, etc.) is, therefore, clonal progeny of the nuclei which were present in the mother spore. Our group has found direct evidence that within individuals of AMF genetically different nuclei can coexist. Furthermore, our study species Glomus intraradices has been shown to be haploid. This view has very recently been challenged and the alternative hypothesis has been proposed, that all nuclei within an AMF individual are genetically identical and that polyploidy rather than haploidy should be the rule.

My working material consist of a collection of individuals of the AMF G. intraradices all of which come from one agricultural field near Zürich, Switzerland. These isolates have been transferred to the lab where they are cultivated on transformed carrot roots in a standardised environment. Together with Gerrit Kuhn we have shown that large genetic and phenotypic exist between these isolates. This excludes the possibility that nuclei of different individuals of a population of G. intraradices are identical. It also shows that several isolates should be taken for comparison of AMF populations or species in ecological and molecular experiments. Currently I'm performing an experiment in the greenhouse to investigate whether the genetically different isolates also alter plant growth. Other experiments are planned to further investigate mechanisms that could maintain such a high genetic diversity in a population. I would like to get a better understanding how the evolutionary mechanism act in AMF, especially how selection acts in such a multinucleate system.

1993 - 1998
Studies in Biology and Mathematics at the University of Basel, Switzerland.

1998 - 1999
Diploma thesis on the "Resource capture of the parasitic plant Cuscuta campestris" under the supervision of Ian Sanders.

2000 -
PhD Studies on the link between population genetics and ecology in the AMF species Glomus intraradices, under the supervision of Ian R. Sanders at the University of Lausanne, Switzerland.

Varia:
I play the piano, and like to listen to classic (especially Chopin, Liszt, Schumann and others) as well as pop music and hard rock. I enjoy going to the movies and especially enjoyed the LOTR trilogy, play some chess (challenge XEUDI on the Yahoo Games server!), shoot some pool and visit art museums on a rainy Sunday. 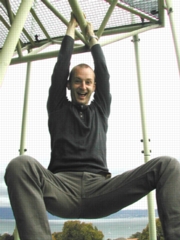