Current research projects
My current post-doctoral projects in Lausanne mainly concern the order and timing of events in the diversification of the annual clade of the genus Mercurialis, including speciation, sexual-system transitions, autopolyploidy, and allopolyploid hybridisations. We are beginning with an investigation of the temporal pattern of introgression between the two diploid species M. annua and M. huetii. Then we will jointly estimate the evolution of the mode of inheritance in the tetraploid M. annua (with the evolution of disomic inheritance), the timescale of speciation and putative changes in population size over evolutionary times. More precisely, we the ability to make statistical inferences on polyploid species, a frequent biological situation rising many methodological issues.
And finally, we will place the transition from dioecy to monecy into the inferred model of speciation in order to better understand its historical context, its connection with a demographic bottleneck, with a polyploidisation-induced bottleneck or other historical features 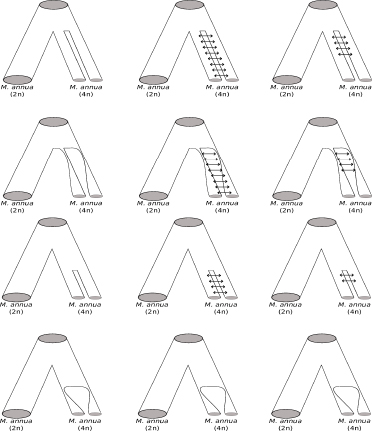 Investigated models of speciation between diploid and tetraploid Mercurialis annua species, according to the timing of whole genome duplication, their mode of inheritance and population size changes

Previous research project
During my PhD in Lille, I investigated the relative effects of demographic history and indirect natural selection on molecular evolution of sequences in Arabidopsis halleri and A. lyrata. These two self-incompatible plant species differ strikingly by their ability to tolerate soils polluted by heavy metals, A. halleri being a highly tolerant hyperaccumulator. First, I tested whether the evolution of heavy metal tolerance was coincident with an ancient split of A. halleri and A. lyrata, or is associated with recent human activities. By using model comparisons in an approximate Bayesian framework, we have shown that the speciation event and the major mutation responsible of for heavy metal accumulation both occurred in a very narrow time-scale [1].

Distributions show the 95% HPD of (1) the average time of divergence (Tdiv) per locus between any A. halleri and A. lyrata lineages estimated as Tdiv=Ksyn/(2.μ) where Ksyn is the observed synonymous divergence per locus and μ the synonymous mutation rate. Black dots represent the observed values at 29 loci; (2) the divergence time between A. halleri and A. lyrata gene copies at HMA4 locus estimated with BEAST; (3) the time of speciation (Tsplit) under the best model obtained using our ABC approach; and (4) the time of the first duplication at AhHMA4estimated with BEAST. Thick horizontal lines represent the mode of each distribution.

Using the investigated neutral expectations, I then measured the physical extent of the genomic region showing an excess of neutral polymorphism due to linkage to a molecular target of balancing selection.
Negative frequency dependent selection acting at the locus responsible of self-incompatibility in Arabidopsis represents one of the strongest cases of balancing selection, and yet we have shown that its indirect effects on neighboring regions are restricted to a few kilobases [2]. A script written in python using simuPOP is available.

Red stars designate loci for which we detect an excess of polymorphism due to linkage to the Slocus (grey box).

During my previous postdoc with Nicolas Galtier and Nicolas Bierne in Montpellier, I developed a method to infer genome-wide heterogeneity in introgression rates between two divergent genepools in a speciation context. This approach applied to the Mytilus complex provided more accurate estimates of the best-supported speciation model than the classic methods [3]. By applying this approach to NGS data, we detected genomic islands of introgression between two partially sympatric Ciona intestinalis. These species are highly divergent (14.4% of synonymous divergence), but hybrids have been found in natural populations. A genomic picture of introgression events was drawn in order to understand how introgression occurred between two gene-pools at the final steps of the speciation process [4]. A dedicated website to investigations on genome-wide heterogeneity in introgression rates is available here. 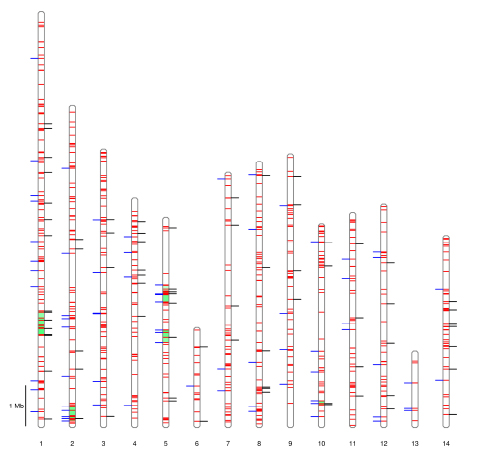 Approximate Bayesian computation analysis of speciation between a diploid and a tetraploid species.