Faculty of Biology and Medicine
Department of Ecology and Evolution
You are here:  UNIL > Alain Jacob

In a second project we have the similar goal of finding optimal management strategies for increasing the long-term survival of endangered species. Population models basing on data of existing populations (e.g. Lesser Kestrel & Bearded Vulture) are developed so that the genetic consequences of different management strategies (e.g. sex ratio shifting & equalisation of reproductive success) can be measured and their usefulness can be determined.

During my master thesis I was investigating possible explanations for the evolution of genitalia complexity. This included a functional morphologic and a taxonomic study on scorpion male genitalia (Euscorpius sp.). Furthermore I did several scorpion-mating experiments to define forces driving sexual selection.

2005-
July-: Continuation of PhD-study in the group of Prof. C. Wedekind, Conservation Biology, Departement of Ecology and Evolution, University of Lausanne, Switzerland.

2004-2005
July-July: PhD-student in the group of Prof. C. Wedekind, Division of Conservation Biology, University of Bern 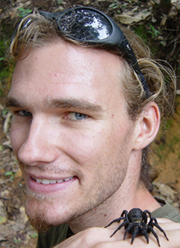