Faculty of Biology and Medicine
Department of Ecology and Evolution
You are here:  UNIL  > Elodie Chapuis

Many plants and some animals are hermaphrodites and can therefore self-fertilzed. Selfing presents avantages like reproductive assurance and not the cost of outcrossing. Despite those, selfing is not the major mating system choosen by organisms. The reason often argued for this state is the presence of inbreeding depression. Inbreeding depression is, in general, viewed as the loss of fitness of inbred individuals compared to outbred individuals. The freshwater snail Galba (Lymnaea) truncatula represents a good model for studying the evolution of mating system. Indeed, this specie is a preferential selfer but selfing rates can vary between populations. In this regard, the purpose of this study is to determine the evolutionary consequences of selfing in Galba truncatula: 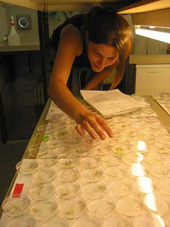