Faculty of Biology and Medicine
Department of Ecology and Evolution
You are here:  UNIL > Joel Meunier

I am interested in evolutionary conflicts, parasitology and the evolution of sociality.
My PhD project is builded on recent studies of the social structure and genetics of the ant Formica selysi. The evolution of complex societies is associated with a network of genetic, ecological and behavioural changes, and the reciprocal interactions between these elements remain poorly known. In particular, the evolution of social insect colonies with multiple queens is a puzzle for evolutionary biologists and a challenge to kin selection theory.
During my PhD, I will study the link between social structure and dispersal, the cause and consequence of sex ratio variations and the effect of social structure on the resolution of genetic conflicts among colony members. 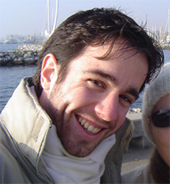