Faculty of Biology and Medicine
Department of Ecology and Evolution
You are here:  UNIL > Tanja Scheublin

Interactions between plants and soil microbes can have a large influence on plant performance and plant community structure, while in return plants can modify soil microbial communities. I am particularly interested in the interactions between plant roots, arbuscular mycorrhizal fungi (AMF) and soil bacteria. AMF are symbiotic soil fungi that are able to colonize the roots of about two third of all terrestrial plant species. They assist plants with the uptake of immobile nutrients such as phosphorus, and, therefore, the thin hyphae can be considered as an extension of the root system. It is well known that bacterial colonisation of the rhizosphere (the zone around plant roots) can be crucial for many pathogenic as well as symbiotic plant-microbe interactions. Similarly, colonization of hyphae might also be important. However, even though extensive literature exists on rhizosphere colonization, surprisingly little is known about hyphal colonization. In my research I combine community approaches with studies on individually isolated bacterial strains. 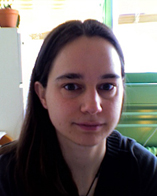