I am an evolutionary biologist working on social evolution. More precisely, my research interests lie in the study of cooperation, recognition systems and ageing in social groups. My work is mainly experimental and often combines different approaches and techniques to encompass different aspects of the tackled questions. After my Ph.D that focused on the mechanisms of cooperation and conflicts within bumble bee colonies and a two-year post-doc on the fecundity-longevity trade-off within the same models, I am now working on the causes and consequences of social structure variation in ants.

Animal societies display a large variety of social organizations and understanding the causes and consequences of such variations is a major challenge in evolutionary biology. The Alpine silver ant Formica selysi is a particularly interesting model for these questions as this species is socially polymorphic and exists in two distinct social forms that can co-exist within the same populations: some colonies are headed by a single queen (i.e. monogynous colony) while others by multiple fertile queens (i.e. polygynous colonies). Using F. selysi as a model system, the aim of my work is to provide a clearer understanding of the proximate and evolutionary causes favouring the maintenance of social polymorphism in ants. To reach this objective, I perform both field survey and laboratory experiments which combine different approaches and techniques (behavioural observations, morphological and physiological measurements and chemical, genetic and transcriptomic analyses).

How and why these two social forms co-exist in Formica selysi?

Because of physiological constraints and/or resource limitations, evolutionary theory of life-history predicts the existence of trade-offs (i.e. negative correlations between fitness-related traits). One of the most widely studied is the reproduction-longevity trade-off wherein reproduction-related traits such as fecundity correlate negatively to traits such as lifespan. This trade-off also known as ‘costs of reproduction’ has been shown to occur in a large variety of species. Interestingly, however, the opposite pattern has been found in mole-rats and social insect workers and queens suggesting that social evolution interact with ageing and leads to a reversal in the reproduction-longevity trade-off. I have been awarded a two-year post-doctoral grant from the Fyssen foundation to study this interaction between social evolution, ageing and reproduction. During this post-doc, I thus examined the relationship between reproduction and longevity in workers of the bumblebee Bombus terrestris to assess whether sociality genuinely induces a reversal of the trade-off. I found that, in whole unmanipulated colonies, reproductive workers live longer than non-reproductive ones, confirming previous studies. However, I found the opposite pattern when randomly-chosen workers were experimentally forced to become reproductive or not. Attaining reproductive status in social groups often depends on intrinsic quality and experimentally decoupling reproduction from intrinsic quality provided evidence that, in fact, workers experience costs of reproduction. My research thus showed that intrinsic quality differences between individuals may account for the apparently reversed fecundity–longevity trade-off in social insect queens and workers. 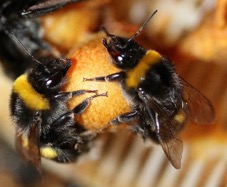 Phd and Master research: Cooperation and conflicts within insect societies

My undergraduate and doctoral work mainly focused on the ultimate and proximate mechanisms underlying cooperation and conflicts within social groups and can be broadly separated into the two following main lines.

Kin-selection theory predicts that genetic heterogeneity within a group generates conflicts over reproduction. In accordance with the theory, reproductive conflicts are highly frequent within insect societies such as those of the annual bumble bee Bombus terrestris, in which workers start to lay eggs and behave aggressively towards the queen and other workers near the end of the colony cycle. The first aim of my work was to unravel the proximate factors underlying the switch from altruistic cooperation to selfish worker behaviour in these societies. My work demonstrated that the start of worker reproduction coincides with a sudden and abrupt change in chemical cues present on queen cuticle. This suggests that workers time their decision to reproduce by 'eavesdropping' on the chemical signals produced by the queen. This work revealed a high complexity in worker reproductive decisions.

Besides the occurrence of homocolonial reproduction, cases of heterocolonial reproduction by workers (worker reproduction in colonies other than their own, i.e. worker reproductive parasitism, WRP) have been described in B. terrestris colonies. The second aim of my work was to deepen our understanding of this behaviour that was largely considered as a random and purely accidental phenomenon. We demonstrated that workers adjust their reproductive behaviour and physiology to their social environment by activating more intensely their ovaries in a foreign environment. Moreover, we showed that the decision of workers to leave their nest to enter in a foreign one is dependent on both individual- and colony-level factors. WRP is not a random phenomenon but a distinct reproductive strategy used by workers to avoid reproductive competition in their own nest. My research thus showed that workers have, in fact, highly flexible modes of reproduction.

(b) Evolution of recognition systems

Elaborated recognition abilities are a central feature of group-living species because they facilitate cooperation amongst group members and help maintain group integrity by decreasing the detrimental impact of competition, predation and social parasitism. The first part of my work aimed at disentangling the cognitive mechanisms involved in the reduction of within-group conflicts in the context of reproductive hierarchies. Dominance hierarchies are commonly found in social insects and this is particularly true when colonies comprise several individuals with equivalent reproductive potentials. Using a habituation/discrimination procedure, I studied the within-group recognition systems of the ant Pachycondyla apicalis, in which competition of workers over male parentage results in the formation of a linear reproductive hierarchy. Overall, we demonstrated that competing workers are able to discriminate each other individually and that this recognition system is likely based on a single fertility-related cue. A simple recognition system such as the one showed by P. apicalis ants can thus allow to regulate reproductive conflicts. In the second part of my work, I investigated whether B. terrestris evolved mechanisms for reducing the costs of WRP and maintaining group integrity. We demonstrated that nest-entrance guards specifically recognize and are more aggressive towards would-be parasites than towards non-parasites, suggesting that the recognition system of B. terrestris has evolved at least partly in response to WRP. 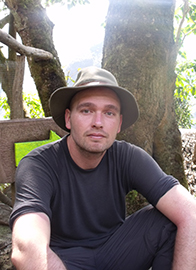