My scientific interest is mainly to better understand plant evolution and survival strategies in the broadest possible perspective. Therefore, I've been particularly interested by plant population biology and especially population genetics.
I first made a little "detour" into the Bryophytes life style, because these fascinating organisms are understudied. I worked on the ecology of arable field's bryophyte flora (Parisod, C. & Streiff, A., 2001) Then, I turned to the population biology of two introduced population of Sarracenia purpurea L. in the canton de Vaud. Population genetic survey together with field pollination experiment, allow us to get insights about the way this carnivorous species reacted to introduction in Switzerland until it presents a weedy behaviour (Parisod, Trippi & Galland, 2004).

Biscutella laevigata presents two cytotypes which derive from one another by auto-polyploidy. Since Manton's work (1934), the (2n=18) populations are thought to be interglacial relicts that survive Pleistocene vicissitudes in ice-free parts of the Alps while (2n=36) populations are interpreted as post-glacial immigrants.

Since both diploids and polyploids have been detected in putative perialpine refugia, the principal aim of this study is to better understand the Pleistocene-Holocene history of Biscutella laevigata in the western Alps. as well as to precise the polypoidization mechanisms. A multiscale phylogeographic approach is undertaken by molecular means with cpDNA (PCR-RFLP) and AFLP markers which should enable us to infer glacial refugia and principal migration roads, as well as to precise the polypoid origins. At a local scale, both diploid and polyploid population systems are investigated and compared to get insight about their biology and respective adventages.

In collaboration with the MODIPLANT project and with Stéphane Joost (LASIG, EPFL), some emphasis is put on gene dispersal in the real landscape by coupling a genetic point of view with a spatial one. A GIS-based approach allows to provide predictive habitat maps as likelihood spaces for B. laevigata. Transportation vector maps (wind, gravity, hydrography) overlayed with these areas reveal genes migration pathways (Joost & Parisod, 2004). Identifying genes migration pathways will be of great interest for biodiversity management and conservation purposes, as well as for topics related to plant distribution and evolution under changing climate. 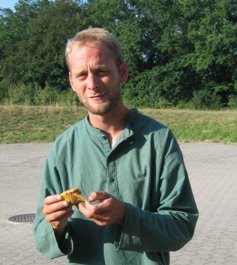