Drosophila population genomics
Understanding the distribution of genetic variation in natural populations is the key to decipher the mechanisms underlying adaptation. Since the advent of next-generation sequencing it is possible to study allele frequency differences on a genome-wide scale. I am interested in detecting genomic variation, which allowed Drosophila melanogaster, an organism previously restricted to Sub-Saharan Africa, to colonize non-tropical environments. Using whole genome analyses and bioinformatics, I am interested in studying population genomic patterns and to detect adaptive candidate loci in populations collected in diverse environments and in selection/experimental evolution lines.

Functional basis of natural variation in Drosophila life history
The range expansion of Drosophila melanogaster to non-tropical, temperate environments has imposed many challenges and has led to a number of important adaptations, including major changes in life history traits (for example, the evolution of reproductive diapause and associated phenotypes such as lifespan and stress resistance). Using Drosophila genetics and functional genomics, I am interested in investigating the effects of candidate genes and polymorphisms on life history physiology. In a related approach, I am interested in functionally characterizing life history candidate genes and polymorphisms from selection/experimental evolution experiments.

Evolution of chromosomal inversions in Drosophila
Chromosomal inversions represent structural mutations, which are pervasive and widespread in most organisms, including many species of Drosophila. Inversions likely play a key role in genomic evolution as they strongly influence recombination rates. I am particularly interested in better understanding the role of inversions in shaping patterns of genetic variation and how they are involved in adaptation. I am planning to use both experimental and genomic approaches to gain further insights into how inversions impact evolutionary dynamics and phenotypic evolution, especially with regard to life histories.

Martin obtained his BSc in Biodiversity and Evolution from the Karl Franzens University in Graz (Austria) in 2005. During his studies, he worked on a range of topics, including biodiversity of marine algae, behavior of solitary bees, and population genetics of the rainbow trout (Oncorhynchus mykiss).

In 2007 he obtained his MSc in Ecology from the University of Vienna for work on the population genetics of the European bee-eater (Merops apiaster).

From 2007 to 2008 he worked as a research assistant with Prof. Hans Winkler at the Konrad Lorenz Institute in Vienna, where he studied the phylogeny of woodpeckers (Piciformes) as well as the populations genetics of reed warblers (Acrocephalus scirpaceus) and blackcaps (Sylvia atricapilla).

In 2008, he began his Ph.D. studies with Prof. Christian Schlötterer (Institute of Population Genetics, Vetmeduni Vienna), where he switched to working with Drosophila. For his PhD project Martin has been interested in combining experimental evolution with next-generation sequencing technology to study patterns of thermal adaptation in Drosophila melanogaster on a genome-wide scale. 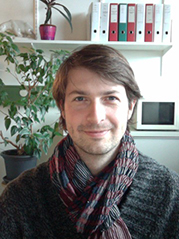