I am interested in human evolution and history and their theoretical understanding.
I think that culture is a major force in these processes. Innovations such as agriculture, social organization, and other technologies have increased the vital rate of humans. Maladaptations, on the other hand, encompass customs and practices that may decrease it. Cultural traits therefore are likely to affect human population growth. Changes in size and composition of population, in turn, are itself crucial for the evolution and the accumulation of technology and maladaptations.
Culture has also an impact on our everyday life and relationships. Everyone is part of a social group, which is made up of individuals tied by one or more specific types of interdependency, such as friendship, kinship, common interest, dislike, sexual relationships, or relationships of beliefs, knowledge or prestige. The exchange of information among subjects, and their evaluation of such exchanges, are then likely to affect the structure of the social network they belong to. The number and strength of their relationships, in turn, are important for the flow of the shared knowledge.

In my PhD I will take advantage of theoretical tools and simulation technique in order to understand the two phenomena.
I will develop a mathematical model in which technologies and by-product maladaptations are invented by individual learners, easily copied and used by social learners, and transmitted across generations. Because culture is a public good, costlier to produce than to imitate, the interaction between individuals producing and copying culture can be regarded in term of a game theoretic trade-off. I will study the effect of this trade-off on the coevolution between cultural dynamics and population size, letting individuals interact in subdivided populations of finite size, subjected to demographic and environmental stochasticity. I will then analyze the effects of the emerging cultural dynamics on local and global population carrying capacities.
I will also consider a dynamic social network model in which individuals discover new knowledge individually and share information in pairings determined by a stochastically evolving social network. Individuals begin to interact at random, with the interactions modeled as games. The game payoffs, or the evaluation/satisfaction of the cultural exchange, determine which interactions are reinforced, and the network structure emerges as a consequence of the dynamics of the individuals' behavior. I will analyze this in different conditions, and study the effect on the spread of culture in the population.

2009-
Ph.D. in Evolutionary Ecology, Department of Ecology and Evolution, University of Lausanne (started at the University of Neuchâtel). Supervisor: Laurent Lehmann. ("Cumulative cultural dynamics and demography: a co-evolutionary approach")

2004 - 2007
Bachelor of Sciences in Biotechnology (Molecular course) at University of Milano-Bicocca, Italy. Supervisor: Prof. Luca De Gioia. (“Computational study of the interaction between the Akt protein and its potential inhibitors of biological interest.”) 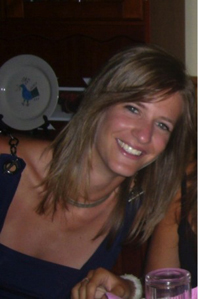