My PhD research focuses on understanding local adaptation in European minnows (Phoxinus phoxinus). Minnows are small cyprinid fishes widespread in Swiss rivers and lakes at low to relatively high altitudes (400m to 2800m). Even if some populations were introduced only 60 years ago, minnows might have had time to adapt to particularly harsh environments and fragmented habitats such as alpine lakes.

In this context, I am interested in local adaptation of minnows to altitude in Switzerland. More specifically, during my PhD I aim to characterize local selection pressures that potentially drive divergent selection across minnows populations. To address this issue, I am using an approach based on the detection of genetic (neutral and non-neutral) and morphological divergence between minnow populations. More specifically, I will investigate populations sampled at various altitudes for:

2001-2004
Bachelor studies at the university of Pau, France
"demographic and genetic study of the invasion's dynamic of the marine gastropod Crepidula fornicata"
Biological Station of Roscoff, France 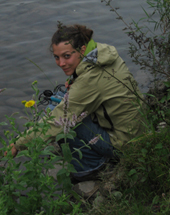