2002 - present: Postdoctoral Research
"Sex specific markers in Crocidura russula", Université de Lausanne, Switzerland
I am a POSTDOC working with Prof. Nicolas Perrin in the Ecology and Evolution of Dispersal Research Group. My main interests are in the molecular evolution of sex chromosomes, and in using sex-specific markers (particularly the paternally inherited mammalian Y chromosome) to infer population history and demography.
In my current research project I am focusing on a model mammalian species, the greater white-toothed shrew (Crocidura russula), which has been chosen due to the peculiarities of its breeding system (monogamy and female-biased dispersal as opposed to polygyny and male-biased dispersal, which is typical in mammals). I am using a comparative approach incorporating maternal (mtDNA), paternal (Y chromosome SNPs and microsatellites) and bi-parentally inherited (autosomal microsatellites and X-linked SNPs) molecular markers. Combining information from these differentially inherited markers will help to improve our understanding of:

For more information about dispersal in C. russula, refer to the Prof. Perrin's Research Group.

I carried out my first postdoc with Prof Hans Ellegren at the Department of Evolutionary Biology, Uppsala University. The main focus of my project there was on the molecular evolution of genes on the avian sex chromosomes, in particular an investigation of evolutionary strata formation on the chicken Z chromosome:

The human X chromosome exhibits four "evolutionary strata", interpreted to represent distinct steps in the process whereby recombination became arrested between the proto X and proto Y (Lahn & Page 1999). To test if this is a general feature of sex chromosome evolution, we studied the Z-W sex chromosomes of birds, which have female rather than male heterogamety, and evolved from a different autosome pair than the mammalian X and Y (Fridolfsson et al. 1998). We analyzed all five known gametologous Z-W gene pairs to investigate the "strata" hypothesis in birds. Comparisons of the rates of synonymous substitution and intronic divergence between Z and W gametologs reveal the presence of at least two evolutionary strata spread over the p and q arm of the chicken Z chromosome. A phylogenetic analysis of intronic sequence data from different avian lineages indicates that Z-W recombination ceased in the oldest stratum (on Zq) 102-170 million years ago (Mya), before the split of the Neoaves and Eoaves. However recombination continued in the second stratum (on Zp) until after the divergence of extant avian orders, with Z and W diverging 58-85 Mya. Our data suggest that progressive and stepwise cessation of recombination is a general feature behind sex chromosome evolution.

For further information on the Dept. Evolutionary Biology, see www.ebc.uu.se/evbiol/index.html 1997 - 2000: Doctor of Philosophy (PhD) "Characterisation of diversity and evolution in European sheep breeds and their wild relatives." University of East Anglia, Norwich, U.K. I obtained my PhD in 2000 from UEA, where I was supervised by Professor Godfrey Hewitt. My PhD can be summarised as follows:

1. Genetic diversity was compared within and between 23 European domestic sheep breeds, and one wild species (the European mouflon) using 12 microsatellite loci. Levels of gene diversity and heterozygosity were found to be well maintained in commercial breeds compared to feral types, although inbreeding levels were high, reflecting concentration on a small number of breeding rams. Genetic variation due to breed subdivision was 13-14%, however feral primitive types from Northern Europe contributed most of this diversity. The role of genetic drift was found to be considerable in terms of within breed diversity and between breed differentiation. A test of individual genotype assignment was found to be a powerful tool for detecting introgression between breeds. This study was carried out as part of a European Union Framework IV project, with the collaboration of Fiametta Santucci at UEA, and Mike Bruford, Kate Byrne and Saffron Townsend, at the Institute of Zoology, London.

2. A Y chromosomal marker (ZFY final intron) was developed in order to analyse the paternal ancestry of domestic sheep and to build a phylogeny of the wild sheep and goats within the tribe Caprini. ZFY was particularly informative for resolving deep evolutionary divergences, a level at which mtDNA is saturated with mutations, and was used to try resolve some of the complex relationships within the group. This marker was also used by our co-workers (Pierre Taberlet, Gordon Luikart and Nathalie Pidancier, Université de Grenoble, France) to produce a detailed phylogeny of the genus Capra. Very little polymorphism was found within domestic sheep or goats, but the presence of at least 2 haplotypes in sheep and 3 in goats is suggestive of multiple paternal ancestry.

3. Sequences from the ZFY intron were then compared to their gametologous copies on the X chromosome (ZFX), and results from this analysis suggest that the Caprini are subject to weak male driven evolution. This provides further support for the growing body of evidence that due to the larger number of cell divisions involved in sperm compared to egg production, males are the major generators of mutations occurring during DNA replication. Comparison to published values in other mammalian taxa implies correlation with reproductive life span. (See Lawson LJ and Hewitt GM (2002) Comparison of substitution rates in ZFX and ZFY introns of sheep and goat related species supports the hypothesis of male-biased mutation rates. Journal of Molecular Evolution 54: 54-61). For more info on Godfrey's lab see www.uea.ac.uk/bio/GH.html 1992 - 1996: Bachelor of Science degree (BSc. Hons) Genetics, University of Liverpool, U.K. 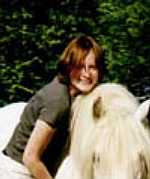