During my PhD, I was interesting in sex determination and sex chromosome evolution in Silene latifolia, one of the rare dioecious (having separate male and female sex) plant species presents in Angiosperm. I switch now to a completely different model but still with (hopefully) sex determining system, the ant species. Ants are social insects with highly developed social organizations. They live in a caste system comprising workers, queens and males. The differentiation between castes occurs before the third larval instars. How do caste determination and differentiation occur? Genes and pathways involved are unknown. The aim of my project is to identify key genes involved in caste determination when the morphological difference between the three castes arises. The model species will be Solenopsis invicta, the friendly and "warm" ant species also called fire ants. To identify those genes, I use the microarrays technology recently developed in the lab. Then, I will start to characterize them. This project will be done in collaboration with Yannick Wurm, John Wang and Christine La Mendola.

2005-
Postdoc at the University of Lausanne (Switzerland), in the Department of Ecology & Evolution (Prof Laurent Keller).

1999-2001
Studies in Physiology, molecular and cellular biology.
University of Clermont-Ferrand, University of Lyon.

1997-1998
Studies in Medicine. University of Clermont-Ferrand. 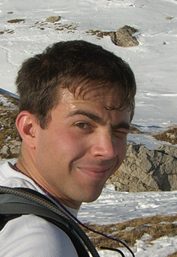