People have always tried to find ways to live longer. However, our life-span may have increased but aging, accumulation of damage, still remains, and not only in humans but also in other organisms. The answers to questions, why and how aging persists in natural populations, are controversial and still poorly known. One of the most influential theories in explaining aging is the “free radical theory of aging”, which says that the aging is caused by the accumulation of oxidative damage in molecules, cells, tissues and the whole organism over time. Oxidative damage occurs when the production of free radicals exceeds the repair and defence mechanisms of the body. Specifically, the free radical production has been suggested to be the key factor of aging in short-living organisms.

Main source of free radicals is respiration, energy production, in mitochondria. However, uncoupling proteins (UCPs), can make mitochondria produce heat instead of ATP resulting in decreased free radical production providing a promising approach for explaining the mechanisms of life-history trade-offs.

In my PhD I’m studying how the uncoupling proteins (and free radical production), shape the life-history traits, such as reproduction success and life-span in natural populations. As a study organism I use common vole (Microtus arvalis), which is short-living rodent with high reproduction rate. In Switzerland it occurs up to 2000m allowing me also to study altitudinal differences between low- and highland populations. I’ll perform several experiments in the lab and in the field in order to understand the importance of uncoupling proteins in explaining life-history trade-offs in natural populations.

2009-
PhD at University of Lausanne under the supervision of Dr. Pierre Bize.

2003-2008
Bachelor of Science in Biology (Ecology and Evolution), University of Helsinki, Finland

I play table tennis and like sport in general (both playing and watching). I also play a little bit of guitar every now and then and like listening to good music. And even though it sounds like work, I also enjoy walking in the nature and observing its wonders, especially birds. 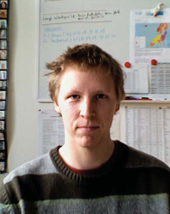