We are interested in the molecular mechanisms of cell differentiation and how their deregulation contributes to human diseases, such as cancer and  cardiovascular disorders. Our research  is focused on key transcription factors that we and others have shown to be important for the development of functional lymphatic vascular system , such as FOXC2, or for the progression of colon tumor cells towards more malignant phenotype , such as PROX1. We are interested in the transcriptional regulation of cell differentiation and the role of transcription factors in human diseases, such as cancer and lymphedema.

One of our projects deals with the mechanisms of cancer progression. The initiating events, such as loss of APC in colon cancer, frequently lead to the development of benign tumors, and in humans many years are required for the transition towards the malignant phenotype. We have shown recently that a transcription factor PROX1 plays an important role in this process via the regulation of cell adhesion and polarity program. We believe that this knowledge is  important for our understanding of gastro-intestinal cancers and could provide novel targets for therapy in these diseases. We are currently working on the mechanistic understanding of PROX1-regulated transcriptional network in cancer and producing mouse models, which will be used to characterize normal intestinal homeostasis and colon cancer progression. 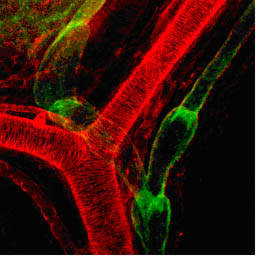