The Institute for Social Sciences of Religions (ISSR)

The Institute for Social Sciences of Religions (ISSR) is a non-denominational, interdisciplinary and multi-methodological academic institute led by Professor Irene Becci. The aim of the institute is to analyze religious phenomena according to four research axes: the psychology of religion (Prof. Pierre-Yves Brandt), the social sciences of migration (Prof. Monika Salzbrunn), the sociology of religions (Prof. Jörg Stolz) and the emergence of the religious and of new spiritualities (Professor Irene Becci). Together, these four axes build the coherence of a research institute which puts a strong emphasis on comparatism.

The ISSR aims more specifically at:

The Observatory of Religions in Switzerland (ORS), which carries out part of these missions, constitutes a specific research center within the ISSR while strengthening its field of competence in this new pluridisciplinary research team.

The Observatory of Religions in Switzerland (ORS)

Founded in 1999 by the sociologist of religion Roland J. Campiche, the Observatory of Religions in Switzerland (ORS) is a research unit directly linked to the first studies on the religious landscape in Switzerland and its evolutions. In 1989, quantitative data from international surveys revealed the changes in religiosity in Switzerland at the turn of the second half of the 20th century. Since then, sociologists of Swiss religions have, by articulating quantitative approaches and qualitative approaches, analyzed these transformations and put them to the test of religious transformations in northern Europe. In 2002, Jörg Stolz (ordinary professor at the Faculty of Theology and Religious Studies of the University of Lausanne) succeeds Roland J. Campiche and continues this dynamic of work by making the ORS a research unit specialized in International comparativism. Since 2007, with the implementation of several research projects under the National Research Projects (NRP 58), the ORS has established itself as an indispensable team in the in-depth analysis of developments in the religious landscape in Switzerland.

Since March 1st, 2010, the ORS has been incorporated into the Institute of Social Sciences of Religions (ISSR) and has become one of its main research centers. Enrollment in such an interdisciplinary structure reinforces the ORS’s fields of competence and contributes to a better international visibility of the work on the observation and analysis of contemporary religious affiliation and practice in the Swiss context. In August 2011, Professor Monika Salzbrunn was elected director of the ISSR. Thanks to her international responsibilities and mandates (AISLF International Association of Sociologists of French Language, EASA European Association of Social Anthropologists, ESA European Association of Sociology, standing committee POPADIVCIT Popular Arts, Diversity and Cultural Policies in Post-Migration Urban Settings of the network IMISCOE International Migration, Integration and Social Cohesion), she has registered the ISSR in several European and international projects. 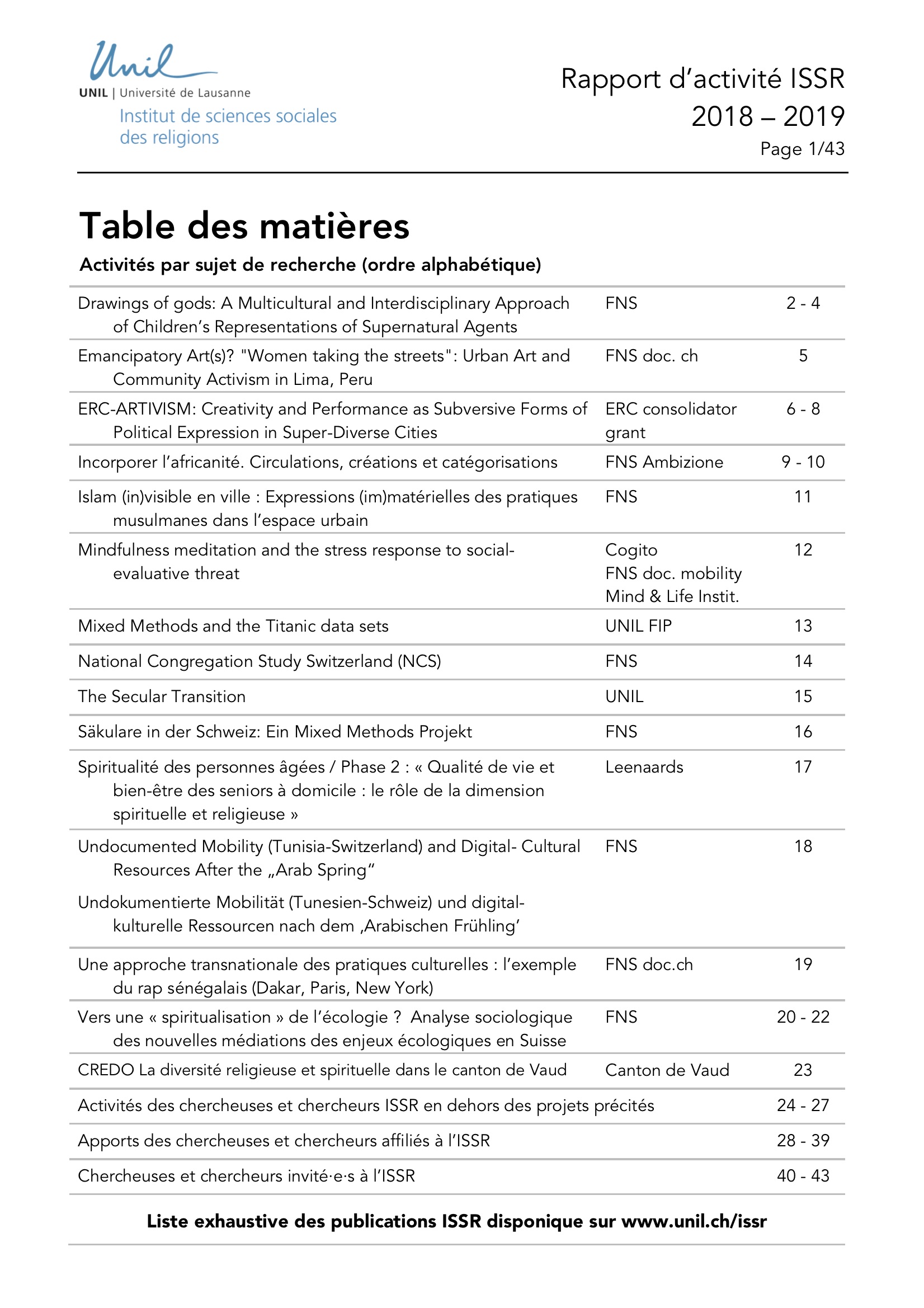