Sanjiv Luther studied cell biology at the ETH in Zürich. He received his PhD in 1996 from the University of Lausanne for his work on anti-viral immune responses in the laboratory of Hans Acha-Orbea. He then moved to the laboratory of Jason Cyster at the Howard Hughes Medical Institute at the University of California San Francisco where he investigated the role of chemotactic factors in lymphoid tissue development and function. In 2003 he joined the Department of Biochemistry as Assistant Professor funded by a career-development award from the Swiss National Science Foundation. Since 2009 he is Associate Professor. His current research focuses on the characterization of fibroblastic stromal cells found within secondary lymphoid organs and sites of chronic inflammation.

Secondary lymphoid tissues, such as lymph nodes and spleen, are sites specialized in the initiation and regulation of adaptive immune responses. It is within the T cell rich zone of these organs that dendritic cells (DC) present the captured pathogens to recirculating T cells in order to activate the rare antigen-specific T cells. While we have made considerable progress in understanding the biology of the mobile DC and T lymphocytes, we know relatively little about the resident stromal cells that form the ‘niches’ within this unique microenvironment. Over the past six years we have developed the technology to isolate, culture and characterize stromal cells of the T zone at the phenotypic and functional level. We could demonstrate that these cells are not simply the backbone of the T zone, but are key players regulating T cell homeostasis and activation. The interest of the lab is now focused on dissecting further their development, phenotype and function, both during homeostasis and disease. We believe that a better understanding of these cells is critical to improve adaptive immune responses against vaccines and infections or to dampen them in situations of autoimmunity.

Stromal cells of primary lymphoid organ, such as the bone marrow and thymus, have been extensively studied and shown to be important for the generation of niches allowing the correct localization, differentiation and proliferation of hematopoietic cells. Besides representing a structural framework, they provide several factors, such as cytokines, chemotactic factors (chemokines), adhesion molecules and extracellular matrix (ECM) proteins.

Much less is known about stromal cells of secondary lymphoid organs, including spleen and lymph nodes (LN). In the last few years it has become clear that the compartmentalization of these organs into B and T cell-rich zones is achieved by specialized resident stromal cells that constitutively produce chemokines. B zone stromal cells (also referred to as follicular dendritic cells or FDC) have been characterized phenotypically and functionally and attributed several important functions for B cells, including the production of the B cell attractant CXCL13. However, their T zone counterpart, called fibroblastic reticular cells (FRC), has been mainly characterized morphologically. As they associate with ECM-containing fibers they were considered for a long time as ‘boring fibroblasts’ responsible for the stability of the T zone. Interestingly, these fibers represent hollow tubes allowing afferent lymph and small molecules to enter and to be distributed rapidly to sites within the T zone. These conduits or microvessels serve as information highway for inflammatory cytokines. Fig. 1: Architecture of a murine lymph node. Depicted are the three compartments (B zone, T zone and medulla) with their specific stromal elements as well as the migration path of recirculating lymphocytes and immigrating DC.

Phenotype and function of fibroblastic reticular cells in lymph nodes

The first evidence for an active function of FRC in adaptive immunity came from our finding that reticular stromal cells found throughout the T zone are the major constitutive source of the two CCR7 ligands, CCL19 and CCL21, within lymphoid tissues. We later confirmed this notion by quantitative PCR analysis on highly purified FRC. The importance of T zone stromal cells and the CCR7 ligands most likely secreted by them is best illustrated in a natural mouse mutant (plt/plt) that we and others have described to lack both CCR7 ligands within lymph nodes and spleen. In plt/plt mice DC and T cells fail to accumulate in the T zone leading to an inefficient induction of T cell activation.

Interestingly, FRC form a 3-dimensional cell network throughout the T zone that is used by DC as adhesion scaffold while migrating T cells use it as a road system for their random migration in search of DC presenting foreign antigens. Careful histological characterization allowed us to identify a marker combination unique to FRC of murine LN (gp38/podoplanin+CD31-CD35-CD45-). As we observed FRC-like cells with slightly different properties below the capsule and in the medullary area we coined the term TRC (for ‘T zone reticular cells’) to be able to refer specifically to the CCL19/21+ FRC subset found in the T zone. Based on this knowledge we developed a digestion protocol allowing for the first time their isolation and characterization by 6-color flow cytometry. We demonstrated that TRC have a surface profile distinct from other stromal cell types, such as endothelial cells and FDC. At the functional level, these cells turned out to be potent myofibroblasts. They were not only the richest source of the chemokines CCL19 and CCL21 within the LN, but also of the T cell survival factor IL-7. Antibodies blocking access to LN TRC had the same effect as blocking the survival stimulus IL-7 itself. Interestingly, CCL19 had also a prosurvival effect on naïve T cells. In summary, recirculating T cells appear to ‘recharge their batteries’ during their several hour long stay within T zones by collecting survival factors such as IL-7 and CCL19 produced by TRC. Therefore, secondary lymphoid organs and TRC within the LN T zone control the size of the peripheral T cell pool and thereby the available repertoire for an adaptive immune response. In addition, TRC promote efficient encounters between recirculating T cells and DC to induce T cell activation and possibly T cell tolerance. In conclusion, TRC are not just structurally important cells but play a central and very active role in adaptive immunity.

Characterization of mice deficient in the TRC-derived chemokine IL-7

Based on our finding that IL-7 produced by LN TRC is important for naïve T cell survival we tested a similar requirement for DC found within the T zone. We found myeloid DC to express IL-7 receptor but their turnover was not altered in the absence of IL-7 signals, in contrast to bone marrow-derived DC cultured in vitro. This finding suggested that mature DC do not rely on this factor for survival; alternatively, IL-7 has a redundant role. However, using IL-7 deficient or IL-7 overexpressing mice (in collaboration with D.Finke, Univ. of Basel) we revealed a critical role for IL-7 in the development of blood-derived and plasmacytoid DC, presumably at the level of the IL-7R+ common lymphoid progenitors (CLP) found within the IL-7 rich bone marrow microenvironment. IL-7 signals were already known to be important for T and B cell development. Therefore, this data set questions the dogma that IL-7 is a purely lymphocyte-specific cytokine and provides support for the notion of a lymphoid origin of a considerable fraction of conventional and plasmacytoid DC. Characterization of mice deficient in the TRC-derived chemokine CCL19

CCL19 knockout mice were generated but showed no obvious defect in the architecture of secondary lymphoid organs or the thymus (in collaboration with J. Cyster, HHMI, UCSF), in contrast to CCR7-/- or plt/plt mice. Interestingly, CCL19-/- mice showed reduced T cell survival which was confirmed by the pro-survival effect of CCL19 on naïve T cells. In contrast to plt/plt mice, lymphocyte and DC migration was normal in CCL19-/- mice, as was immune response induction. This result suggests that CCL21 is sufficient to mediate DC migration, maturation and function in the absence of CCL19. However, we found CCR7 expression to be increased on T cells isolated from a presumably CCL19-free environment (lymph, blood) and reduced within LN and spleen. We revealed an important role for TRC-derived CCL19 and to a lesser extent CCL21 in occupying/desensitizing and/or internalizing the receptor. These results not only suggest that recirculating T cells cycle between two states but also that T cells in SLO constantly bind TRC-derived CCR7 ligands with profound implications for their chemotactic responsiveness.

The low number of TRC which can be isolated from LN make it difficult to study TRC functions ex vivo. In addition, good mouse models are currently lacking. Therefore, we generated immortalized LN TRC clones that grow well in vitro and resemble in their surface phenotype ex vivo TRC. In collaboration with the laboratory of M.Swartz (EPFL) we seeded them into collagen-filled sponges that led to the formation of a 3-dimensional TRC network resembling the in vivo morphology, much in contrast to their flat appearance in 2D cultures. Addition of a rigid sponge was necessary to avoid strong contraction of the collagen gels by the TRC. The clones showed very low CCL19 and CCL21 expression and fluid flow was found to recover partially their expression. In addition, fluid flow enhanced TRC alignment and proliferation in vitro. Similarly, ablation of the afferent lymph flow reduced CCL19/21 expression within lymph nodes. We propose lymph flow to be an early signal of inflammation preparing the LN microenvironment for immune response induction. We are currently using this 3D culture system to study the role of TRC in T cell activation.

Given that we can now isolate, culture and characterize TRC at the single cell level opens up many avenues of future research. Our present and future studies aim at improving our understanding of TRC and their role for T cells and DC in homeostasis and immune response. Importantly, lymphoid infiltrates observed at sites of chronic inflammation are associated with similar stromal cell networks, both in mice and men (collaboration with C. Buckley, UK). Therefore our studies should help in designing intervention strategies to enhance beneficial or suppress harmful immune responses within secondary or tertiary lymphoid tissues by targeting directly the development or function of TRC which appear to act as the local organizer cells. 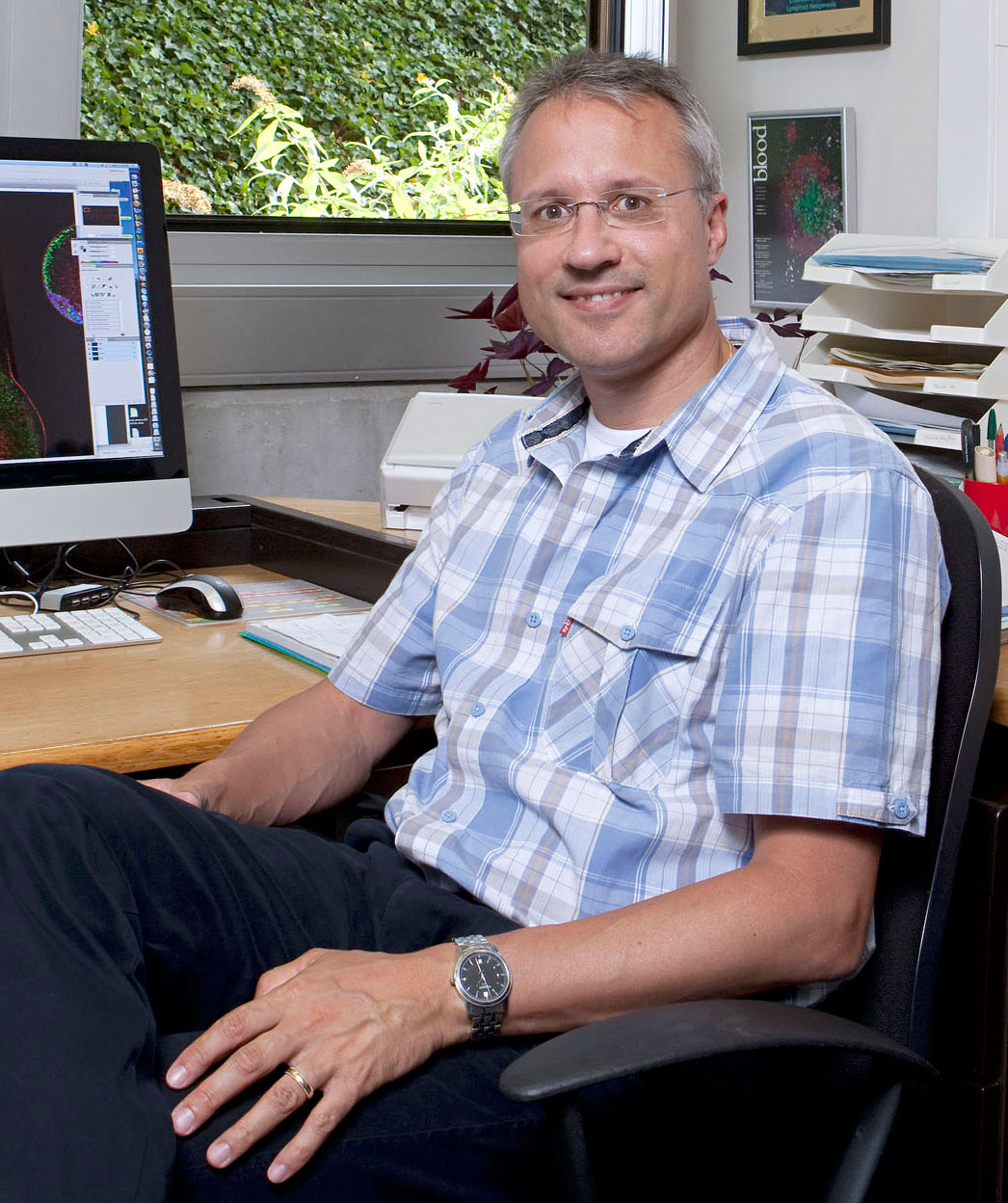