As soon as you announce your pregnancy, you will benefit from protective measures and specific rights.

Throughout the pregnancy and the 16 weeks following childbirth, the employing entity cannot dismiss an employee, subject to motives leading to immediate dismissal for valid reasons (Code des obligations, art. 336c).

During the trial period, the employing entity can terminate the contract at any time at seven days’ notice. The notice is in principle valid, the validity of the dismissal can however be disputed in virtue of the Federal Act on Gender Equality.

Pregnant women and breastfeeding women cannot perform dangerous or difficult tasks unless a risk analysis has established that there is no threat to the health of the mother or child, or appropriate protective measures have been taken.

As from the beginning of the pregnancy, the maximum daily working time is nine hours. Subsequently, other restrictions apply for activities that are mainly carried out in a standing position.

During the first seven months of pregnancy, a woman who works between 20:00 and 6:00 can request to do equivalent work during the daytime. During the eight weeks preceding childbirth, nightwork is forbidden.

During your pregnancy, you can, upon simple notification, either not go to work or leave your working place. As in the event of illness or accident, your salary will be paid for a limited period of time if a medical certificate proves that you are unable to work due to your pregnancy.

In the event of pregnancy, the holiday entitlement is maintained. However, the employing entity can reduce the duration of your holidays if you have been unable to work for more than two complete months per calendar year due to your pregnancy. The reduction thus does not start until after the 3rd month of absence.

The Loi fédérale sur les allocations perte de gain stipulates that any mother engaged in gainful employment at the time of childbirth is entitled to a maternity leave of 14 weeks, paid at the rate of 80 % of the salary, on the following cumulative conditions:

If these conditions are not fulfilled, the salary will be paid according to the same regulations as in the case of incapacity for work.

Cantonal provisions, personnel regulations and collective employment agreements may stipulate more generous benefits. This is notably the case for UNIL staff (except Student Assistants): during their maternity leave (4 months) and their breastfeeding leave (1 month), staff members receive their full salary.

The Federal Act on Gender Equality, which came into force in 1996, aims to implement the principle of equality between men and women in the field of employment. It prohibits any form of discrimination - direct or indirect – between male and female employees on account of their gender, especially in relation to civil status, family situation or, in the case of women, pregnancy.

This prohibition applies throughout the employment relationship, from recruitment to termination of contract, and concerns all domains: particularly the allocation of tasks, organisation of working conditions, remuneration, professional training and development, promotion and termination of employment.

For instance, it is considered discriminatory 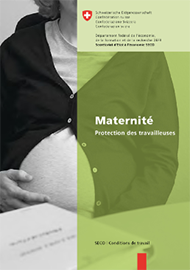