Drama and Pedagogy in Medieval and Early Modern England

In medieval England, when literacy was low and the liturgy in Latin, what did drama teach, and how? What were the implications for Middle English drama of its vernacularity, and how did it engage Latinity? The mystery plays teach scriptural material in the vernacular; the morality plays present subtle theological and philosophical teaching through allegory. In the fourteenth and fifteenth centuries drama is a way of disseminating theological and philosophical ideas: in the sixteenth century, with the rise of humanism, drama is one way the academic community debates those ideas. In early modern England, as the theatre came to rival the pulpit as a mass medium, leading many to attack the stage and many others to defend it, did drama teach or seduce, instruct or distract? As historical circumstances change, how does drama balance the requirements of doctrine and delight – and does it manifest any sense of contradiction between the two?

As well as pedagogy of drama, conference papers might consider pedagogy in drama – scenes in which instruction is portrayed, whether seriously or satirically. How do the Cycle plays engage with Christ as a teacher, or the Morality plays portray the pedagogical methods of Virtue and Vice figures? Humanist influence on the Tudor interlude ensures an interest in education, and examples of dramatized instruction abound in the plays of the early modern professional stage. Hamlet clearly thinks drama itself can teach and reveal – is his view typical, and is it right? Academic drama is a particularly pregnant locus for the exploration of drama and pedagogy: universities and the Inns of Court trained some of the leading playwrights of the early theatre, and, because productions were privately funded by colleges and performed in privately owned halls, the commercial constraints of the professional playhouses did not apply to university drama. In addition to exploring the role of academic drama in socio-political history and theatre history, the conference will examine the reasons for the strong connections between drama and education. Why was drama given a central role in pedagogical practice?

The conference included a reception at the elegant, historic Grande Salle, with accompanying performance of a sixteenth century university play, William Gager’s Dido, in a new translation from the Latin, directed by Elisabeth Dutton. 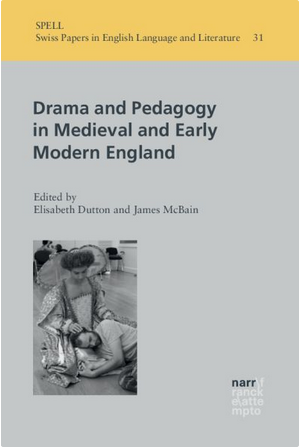