Centaurea is a subproject of the workpackage 3 (WP3.1) of the Project NCCR Plant Survival in Natural and Agricultural Ecosytems which projects ranged from essential research on the physiological processes inside the plants to studies on the plants' interactions within natural and agricultural ecosystems. The aim of WP3 was to understand the spreand and impact of invasive plants. At UNIL, we investigated in particular the invasiveness and ecosystem impact below and above the species level by refining and extending the Centaurea stoebe.

The spotted knapweed, Centaurea stoebe, originates from Europe. It was probably introduced to North America at the end of the 19th century mixed in with alfalfa seeds that were being traded at that time. It has since become an important invasive species in crops causing major financial losses. To biologists, this species represents an ideal model for understanding the causes and consequences of introducing an exotic plant to a region. The establishment and invasive capacities not only depend on the plant's intrinsic traits (morphology, genotype, reproduction method, toxin production,...), but also on the environmental conditions of the area where it is being introduced. Furthermore, they depend on the species' ability to adapt to its new environment such as, for example, the possible consequences of a change in its ecological niche. Studying invasive plants in both their place of origin and in the invaded area is necessary in order to determine which biological factors and which environmental changes could have contributed to their successful proliferation. We could then better predict the future distribution of these plants in their new environment. 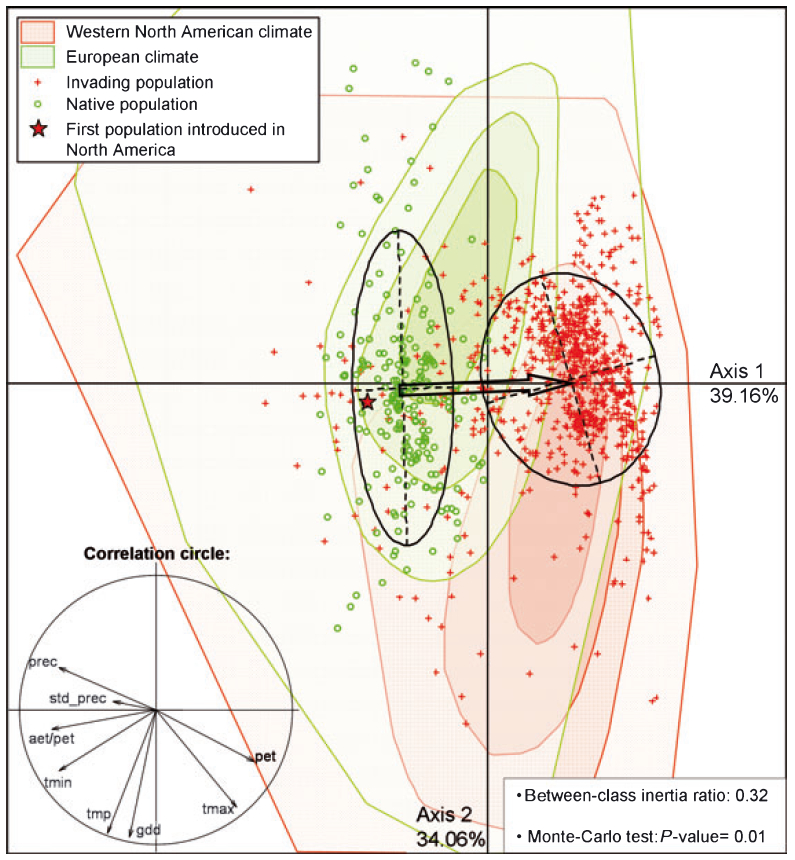 Figure - Bioclimatic space with illustration of niche shift. The position of occurrences, from the native and invaded ranges along the principal climatic gradients is indicated with green dots and red crosses respectively. The red star shows the climatic position of the first population introduced in North America (Victoria, BC). The arrow linking the centroids of the 1.5 inertia ellipses for the two ranges illustrates the niche shift. The enclosed correlation circle indicates the importance of each bioclimatic variable on the two significant axes of the principal component analysis (PCA), which jointly explain 73.22% of the variance in the data. A between-class analysis, yielding a betweenclass inertia ratio, was further conducted and tested with 99 Monte-Carlo randomizations. The convex hulls indicate the prevalence (25, 50, 75 and 100% of sites included) of the global climate conditions in the two ranges. Climatic predictors are: tmp = annual mean temperature, tmax = maximum temperature of the warmest month, tmin = minimum temperature of the coldest month, prec = annual sum of precipitation, std_prec = annual variation of precipitation, gdd = annual growing-degree days above 5 C, aet/pet ratio of actual to potential evapotranspiration, pet = annual potential evapotranspiration. 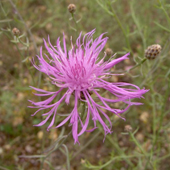