A matter of particular urgency on the agenda of many governments is to increase the quality of life, autonomy, and social participation of citizens in order to significantly reduce the costs of health and social care in the long term. Although such initiatives have considerably rushed the development and innovation activity of companies and research institutions towards new assistive technologies, it still failed to achieve large-scale social and economic impacts.

In this research stream, we therefore experiment with promising technologies to address the societal issue of health, demographic change, and wellbeing of citizens. In parallel, we seek to understand how government agencies can be more successful in the selection and deployment of the results of innovation projects.

Show all Hide all
Wearables for enhancing wellbeing at the workplace

Although public and private organizations are legally responsible to protect the safety, health, and well-being of their employees, there is evidence of an increasing number of occupational and work-related health issues. Facilitated by the broad availability of low-priced sensing devices in the last couple of years, organizations have the possibility to track and accumulate a huge amount of biological, physical, and behavioral data of their workforce, which in turn could be purposefully used for enhancing their well-being at work. With this project we study the introduction of the emerging technology, frequently referred to as “physiolytics”, as well as the many challenges organizations will face during its introduction. Given that the public administration is one of the biggest employers, we will study the affordances and tensions associated with the introduction of this technology in different settings of public organizations.

The introduction of Internet of Things (IoT) raises many questions. Who owns the data generated by devices connected to the Internet? How can data purposefully be used? Are the devices and the data they record sufficiently secure? Are users aware that the recorded data can be used against them in a legal dispute? Other problems may also arise from this data collection, if one considers that the mass of information obtained by companies in this way could be used to decide whether someone keeps his/her job or to make other drastic changes to the detriment of employees.

Although the use of IoT for occupational health is still marginal, it is important to study both, the benefits and risks from using this new way of collecting behavioral and health-related data at work. In collaboration with Prof. Weerts (law) and Dr. Clavien (ethics), the information management team around Prof. Mettler tries to address these challenges, may it be of legal, ethical or organizational nature, by proposing practical safeguards.

Given the demographic changes that developed countries are facing in the next decades, the cure and care of elderly is a significant problem for many public decision makers these days. In fact, providing health to a rapidly aging population with fewer resources has become one of the grand challenges of this century for many governments. Despite an ongoing debate whether health information technology (HIT) is effective and efficient enough to deal with this societal issue, there are generally high hopes and aspirations of policy makers and futurists that technological innovation may solve, or at least minimize, parts of the problem.

Although the number of people in need of support is constantly growing, the outcome of top-down, policy-driven innovation projects have not materialized yet.

In designing assistive technologies for people with mild cognitive impairments, we take an alternative approach in the iCare project and show that small-scale initiatives based on civic actions can play a role in bringing about positive change in a stepwise manner and should therefore be considered as valuable complement to large-scale, policy-driven initiatives.

The current socio-economic situation in Europe is forcing national governments to rise the retirement age. However, given the increased pressure in today’s economies many citizens decide to quit their jobs before reaching the retirement age.

The goal of the Active@Work project is to design a solution that proactively assists senior workers to remain active at the workplace but without compromising their well-being. Active@work will simultaneously provide operational intelligence to learn how to improve the work environment. 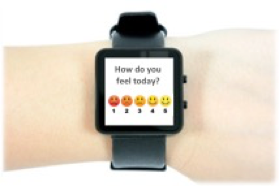 Depression is one of the biggest health challenges the world faces, since more than 350 million people worldwide are affected by this illness. Aside from great personal costs to sufferers and their families, there is also a vast economic impact on society. Because depression often remains unnoticed and consequently untreated in less than half of the cases, in this project we experiment with the use of e-mental health applications that provide mental health services via the Web or related technologies for mental screening, psychological assessment, and treatment.

Digitalization in the public sector

Digitalization provides governments with many opportunities, such as data-driven or algorithmic decision-making, which is far more accurate than traditional human-based judgment and could bring us a step closer toward evidence-based management or policy-making. At the same time, we witness a post-truth, post-factual society where political decision-makers refrain from using the available knowledge base or even fabricate their own “realities” to create confusion and punch holes in what is true, leaving the citizens doubting everything, including real evidence.

In this research stream, we aim to identify and explore the potentials of Smart Government and the introduction of emerging technologies in public administrations and how these might shape the future of communication and interaction between governments and citizens.

Show all Hide all
Open government data platforms and infrastructure

Public agencies are among the largest creators and gatherers of data in many countries. Yet access to public data collections has been limited in the past to selected consignees or released in return of payment only. To increase the outreach and transparency of governmental actions and augment participation of citizens, governments all over the world have therefore started to institutionalize a more open communication culture and liberated the access to large parts of government data. In this project, we investigate and develop instruments in order to increase outreach of open data initiatives.

Switzerland's "Open Government Data" (OGD) strategy calls for cantons, municipalities, cities or organizations close to the federal government to gradually make data on various aspects of public space freely available to the population and the economy.

In contrast to countries organized in a centralist manner and capable of imposing the publication and use of administrative data at all levels, Switzerland must take into account its federal structure and militia tradition. In the absence of coordination and generally accepted data standards, this can lead to a disparate collective effort, depending to a large extent on the resources of each municipality, canton, and the Confederation in terms of content, technique and economy.

The goal of this project is to better understand how a decentralized data ecosystem can be coordinated so that administrative data can be made available in a more targeted way and have a better impact.

PEN-CP (Pan European Networks of Customs Practitioners) is a five-year H2020 network European project launched to promote collaboration in IT innovation between thirteen customs organizations in the EU. The goal of the project is to set up joint pilots involving IT innovations for customs inspections, such as blockchain, Big Data analytics and container-scanning technologies. Other areas being explored include customs modernization and the innovations required to ensure inspection processes work effectively.

This project, along with the “Profile” project, will help us to understand the impact of Big Data implementation on the daily work routines. The aim is to understand how processes including Big Data analytics can alter efficiency and productivity from a public administrator perspective.

“Profile - Innovative Data Analytics, Data Sources, and Architecture for European Customs Risk Management” is a three-years H2020 network European project launched to introduce good practices for data analytics in custom’s risk management between five customs organizations in the European Union (EU). The goal of this project is to accelerate the adoption of state-of-the-art data analytics and the incorporation of new Big Data sources for more effective and efficient customs risk management in the EU.

Thanks to the implication of several business partners in the project, such as IBM or BMT, a living lab will be created that allows us to evaluate real use cases of Big Data for the public administration. Our goal will be to measure systematically how the workers and their work processes are impacted by the introduction of Big Data and how it affects productivity.