This study focuses on the analysis of the federal vote on the popular initiative ‘against mass immigration’of 9 February 2014. More precisely, the analysis focuses on the vote that took place in Ticino, theSwiss canton in which the popular initiative has received the widest support. The study was carried out by the Research Observatory for Regional Politics at the University of Lausanne using a representative survey among 1.429 citizens of Ticino during thedays following the vote. After a contextualization of the vote of 9 February with respect to the history of referenda about foreign policy and immigration issues, the analysis first discusses voter turnout. In this regard, the use of three explanatory models (resources, expertise and mobilisation) reveals that participation in the vote of 9 February was especially characterized by one’s sense of duty, political interest, and links with a political party. The decision howto vote was then influenced by economic, political and identity factors as well as –like other votes in the recent past in the Italian-speaking canton –the particular fear that Ticino would become a ‘double periphery’vis-à-vis both Berne and Lombardy.

The official results of the federal votes of 9 February 2014

The press review is available here 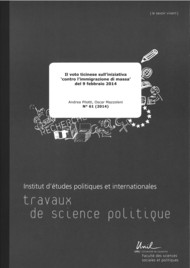