Christian Fankhauser received his PhD from the University of Lausanne in 1994 after carrying out his thesis at Swiss Institute for Experimental Cancer Research (ISREC) in the laboratory of Dr. Viesturs Simanis. He performed postdoctoral studies with Dr. Marty Yanofsky at UCSD then with Dr. Joanne Chory at The Salk Institute for Biological Studies in San Diego. He became a Swiss National Science Foundation Assistant Professor at the Department of Molecular Biology of the University of Geneva in 2000. He joined the Center for Integrative Genomics in January 2005, where he was appointed Associate Professor. In 2011 he was promoted to Professor. In 2019 he was elected to the german academy of sciences Leopoldina.

Both genetic and environmental factors influence growth and development of any living organism. Plant development is very plastic and is constantly modulated by environmental fluctuations. Being photoautotrophic plants are particularly sensitive to their light environment. Light affects every major transition of the life cycle of a plant. To optimize growth according to ambient light conditions plants evolved several classes of photoreceptors including the UV-A/blue light sensing cryptochromes and phototropins and the phytochromes maximally absorbing red/far-red light. Genetic and photobiological studies suggest that the coordinated action of all these light receptors allows plants to fine-tune their development. We use molecular genetics in the model plant Arabidopsis thaliana to decipher the signaling events occurring upon photon capture. 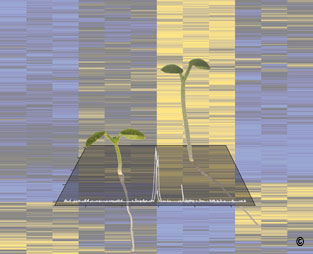 The effects of light on plant growth and development.

Almost all our food, feed, fuel and fiber ultimately derives from plants. Understanding the genetic and environmental factors modulating plant growth is thus of great importance. Plants growth ultimately depends on photosynthesis, the process during which light energy is harnessed for the synthesis of high energy reduced carbon compounds. In order to capture light, plants have evolved unique ways of building cells, tissues and organs, a highly diverse metabolism, and a life-long continuation of versatile growth and development. Given the central importance of light for growth, plants posses numerous photoreceptors enabling them to sense changes in the amount, quality (color), photoperiod and direction of light (Figure 1). Our main goal is to understand how light modulates plant growth and development in order to enable these sessile organisms to optimize their growth habit depending on the environmental conditions. 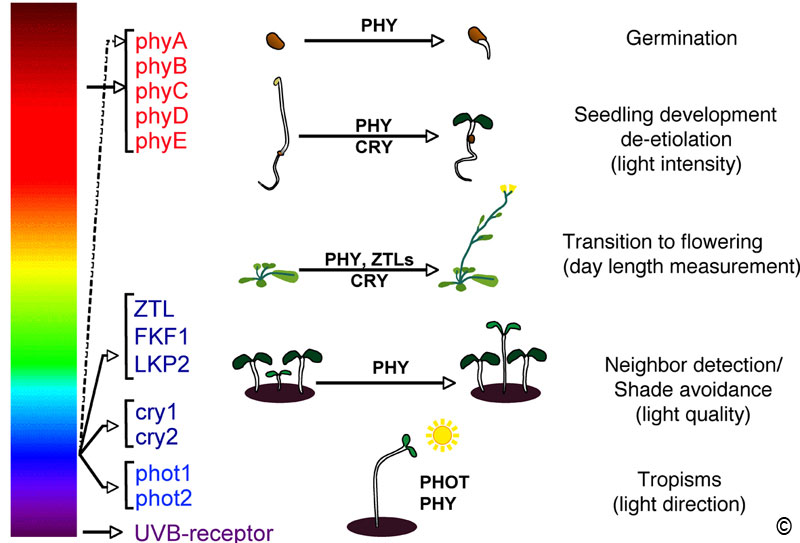 Figure 1: The effect of light on plant growth and development. All higher plants possess several classes of photoreceptors. Phytochromes (phyA-phyE) sense red and far-red light. Three distinct photoreceptor families: phototropins (phot1 & phot2), cryptochromes (cry1 & cry2) and the Zeitlupes (ZTL, FKF1 & LKP2) sense UVA/blue light. UVB-receptors are currently unknown. These photoreceptors allow plants to sense the intensity, quality, periodicity (day-length) and direction of light. These photoreceptors control important developmental transitions (e.g. the induction of flowering). Cryptochrome and phytochromes also determine whether a seedling will adopt an etiolated development (after germination in the dark) or a photomorphogenic development when the seedling develops in the light. The etiolated mode of development allows the seedling to rapidly emerge from the soil into the light. Shade avoidance and phototropism are two important adaptive responses, which allow seedlings to optimize photosynthetic light capture. The list of Arabidopsis photoreceptors is presented on this Figure.
Christian Fankhauser © Unil

Molecular genetic studies in Arabidopsis have identified four photoreceptor families that are present in all higher plants. There are three classes of blue light sensors: cryptochromes, phototropins and members of the Zeitlupe family. In addition the phytochromes enable plants to sense red and far-red light (Figure 1). In Arabidopsis these families are composed of two cryptochromes (cry1 and cry2), two phototropins (phot1 and phot2), three Zeitlupe-like sensors (ZTL, FKF1 and LKP2) and five phytochromes (phyA-phyE). Given that we mostly study phytochrome and phototropin-mediated signal transduction those two photoreceptors are presented in more detail.

Phytochromes are synthesized as Pr (red-light absorbing); upon light excitation (red light is most effective) they are photo-transformed into Pfr (FR light absorbing), which is the active conformer. Light activation of the phytochromes triggers their accumulation in the nucleus where they mediate large changes in light-regulated gene expression (Figure 2). FR light leads to the rapid conversion of Pfr back to Pr, upon prolonged dark-treatment Pfr will spontaneously convert back to the inactive Pr conformer. 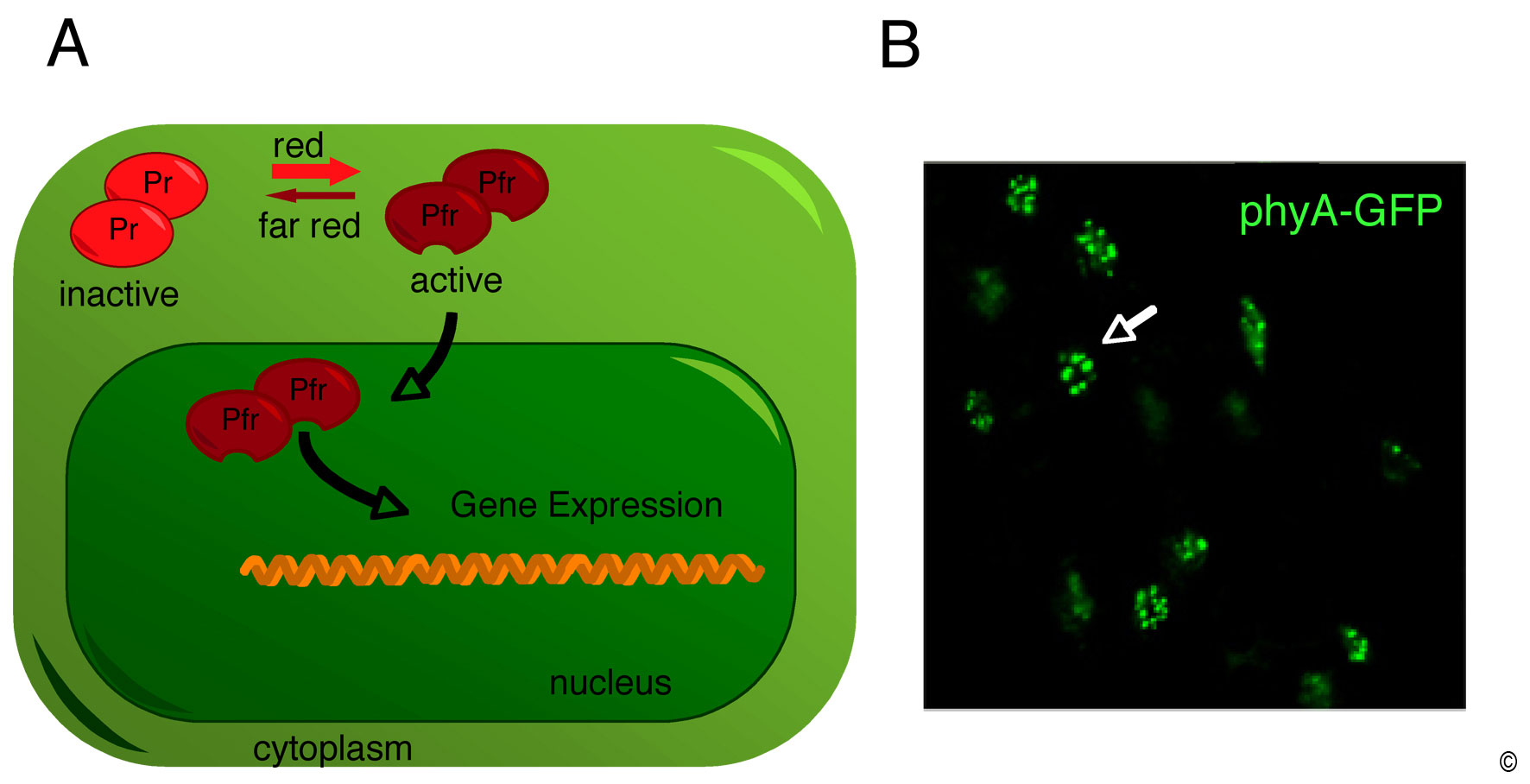 Figure 2: Light controls the subcellular localization of the phytochromes.
(A) Schematic representation of the light-regulated accumulation of phytochrome. Phytochromes are synthesized in their red (R)-light absorbing form (Pr). Upon light absorption the Pr conformer is converted into its far-red (FR)-light absorbing form (Pfr) which rapidly accumulates in the nucleus where it rapidly modulates gene expression.
(B) Etiolated seedlings expressing a PHYA-GFP transgene shortly treated with light were analyzed by fluorescence microscopy. Note that phyA-GFP fluorescence is mostly confined to nuclei (one nucleus indicated with a white arrow) where it is found in nuclear bodies (nuclear substructures of unknown function).
Christian Fankhauser © Unil

Light-regulated gene expression is partly mediated by the conformation-specific interaction between phytochromes in their Pfr conformation and a family of bHLH class transcription factors known as PIFs (Phytochrome Interacting Factor). Photon capture by these photoreceptors induces a suite of developmental responses including seed germination, seedling de-etiolation, regulation of tropic growth, shade avoidance and the control of flowering time (Figures 1 and 3). Some light responses are specifically induced by a single phytochrome (for example only phyA can trigger the de-etiolation response under a dense canopy, Figure 4), but there are many examples where integration of signals emanating from multiple photoreceptors is required (e.g. multiple phytochromes regulate gene expression in response to red light). 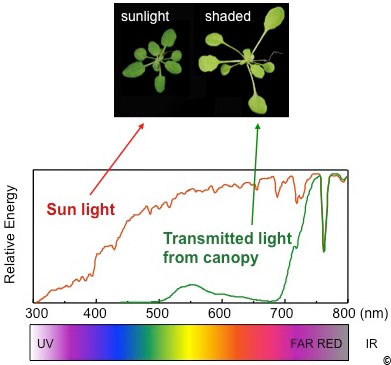 Figure 3: shade avoidance response in Arabidopsis.
Rosettes of Arabidopsis plants grown either in sun-mimicking or shade-mimicking light conditions. Note the elongated petioles and the pale green colour of the plant grown in the shade. The spectrum of sunlight (red) and of light under a dense canopy (green) is indicated below. Plants are particularly sensitive to the R/FR ratio, which is slightly above 1 in the sun and can drop as low as 0.1 under dense vegetational cover. The R/FR ratio has a direct impact of the phytochrome photo-equilibrium (Pfr/Ptot).
Christian Fankhauser © Unil 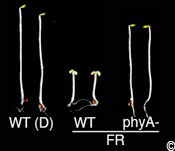 Figure 4: The phytochrome A loss-of-function mutant (phyA) is blind to far-red light (FR).
A wild type (WT) and a phyA mutant grown in monochromatic far-red light. Note that the phyA mutants look like the wild type grown in the dark (D) as shown on the left of the image for comparison. Monochromatic FR light mimics the light condition encountered under deep vegetational cover.
Chrisitan Fankhauser © Unil

The phototropins control phototropism (Figure 5), leaf positioning, chloroplast movements and opening of stomata. This class of photoreceptors thus largely contribute to the optimization of photosynthesis. The phototropins are blue-light activated protein kinases composed of two light-sensing LOV domains and a carboxy-terminal protein kinase domain. Blue light liberates the kinase domain from the inhibitory action of the amino-terminus of the protein containing the photosensory LOV domains. While the initial molecular events triggered by blue light at the level of the photoreceptor are quite well understood, the subsequent steps in signal transduction are still poorly understood (e.g. what are the substrates of the light-activated phtotropins?). A limited number of phototropin signal transduction elements have currently been identified. Our laboratory has studied members of the PKS (Phytochrome Kinase Substrate) family which have been shown to interact with phot1 and are essential for normal phototropism.

Figure 5: phototropism in an Arabidopsis seedling.
An Arabidopsis seedling is photographed at hourly intervals following irradiation with unilateral blue light (light direction is indicated with an arrow). Note that within 2 hours of unilateral blue light asymmetric growth in the hypocotyl elongation zone leads to phototropism.
Christian Fankhauser © Unil

We perform our research with the model plant Arabidopsis thaliana. We combine molecular genetics, genome-wide expression studies, cell biology, biochemistry and imaging of growth processes in Arabidopsis to address the following specific aims: 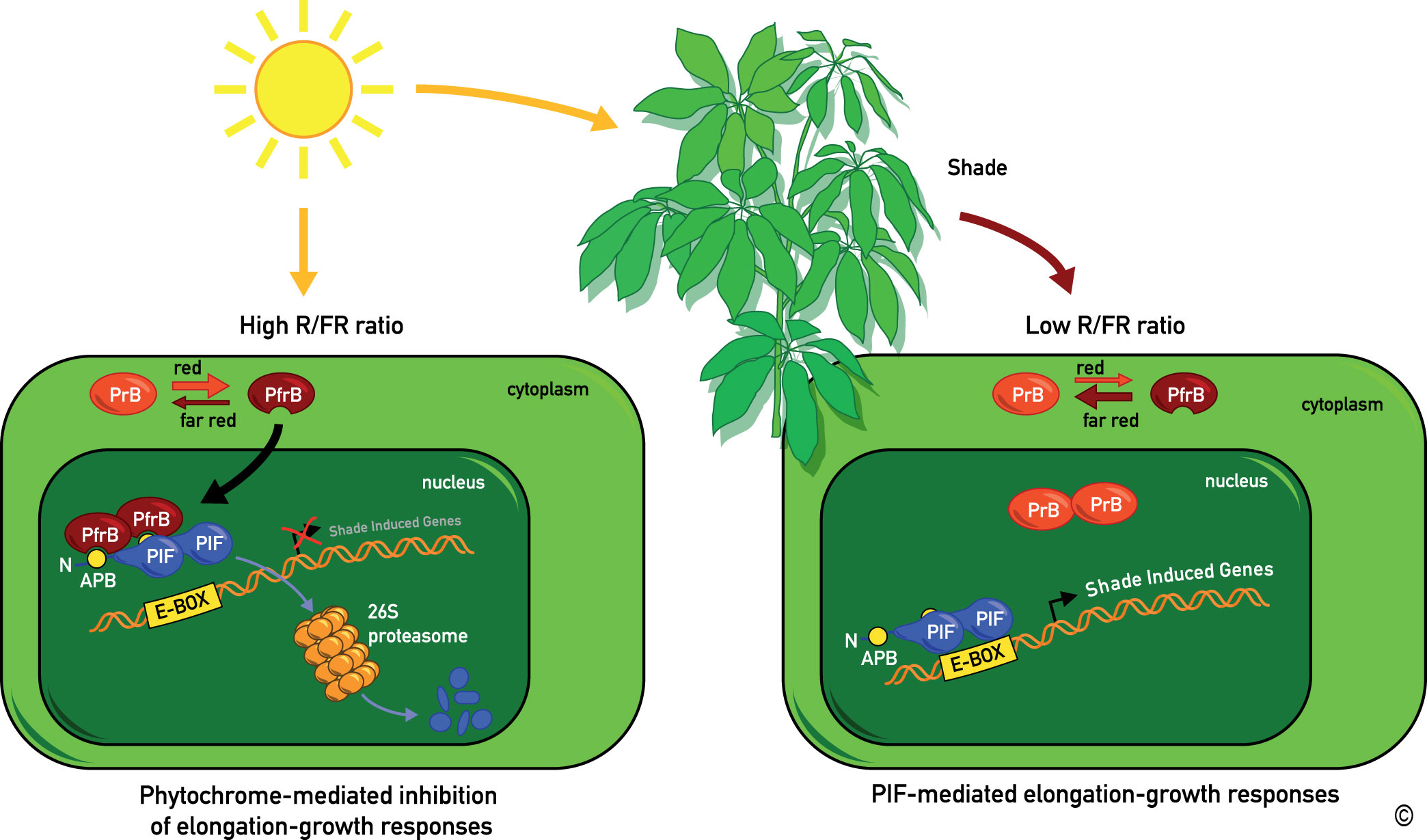 Figure 7: PKS4 is specifically expressed in the hypocotyl elongation zone.
GUS staining of 4-day-old etiolated PKS4pro:GUS lines. This expression pattern is particularly interesting given that these are the cells undergoing asymmetric elongation during tropic growth responses. Note that pks4 mutants have phototropic defects.
Christian Fankhauser © Unil 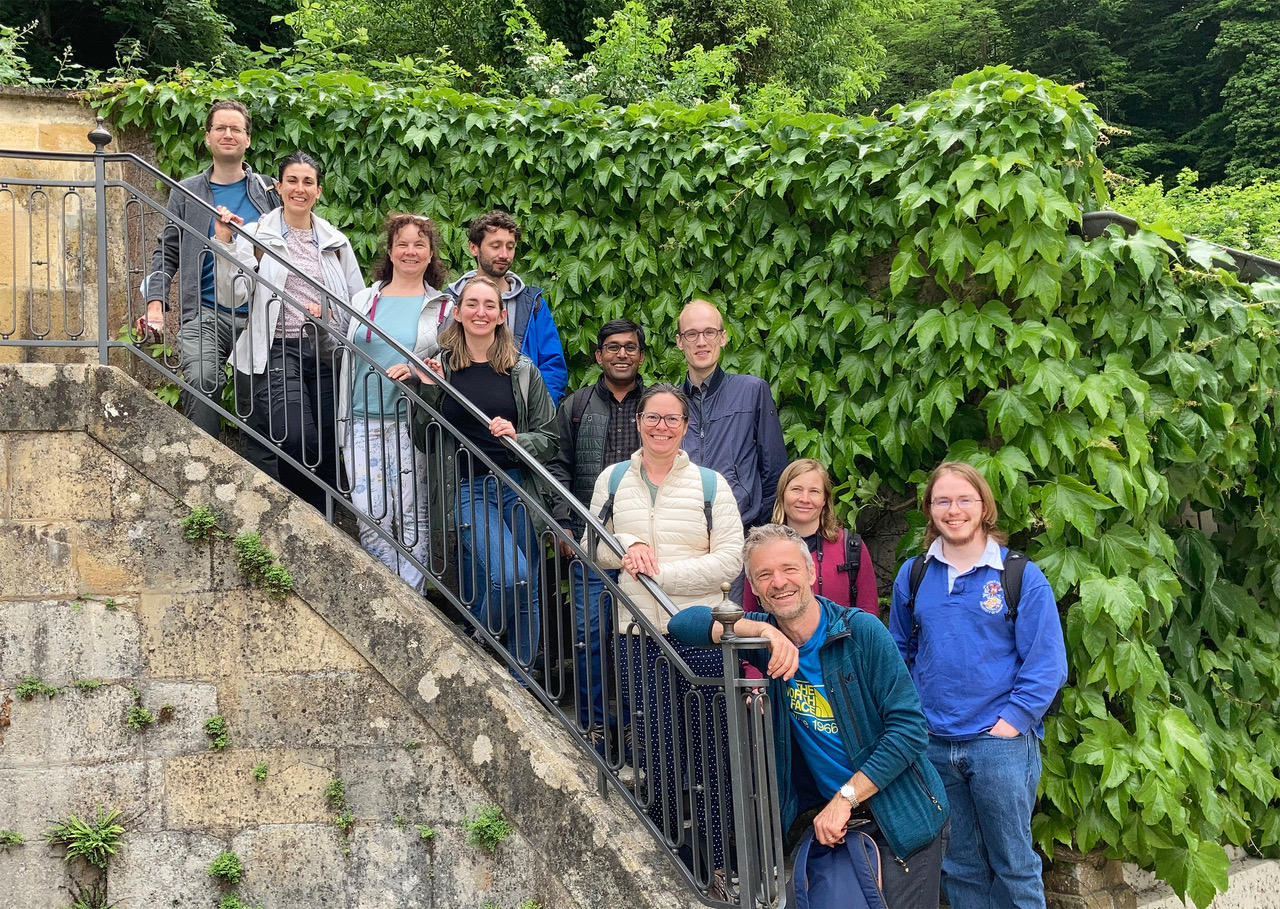 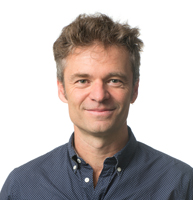