Gian-Paolo Dotto. Dr. Dotto received his MD from the University of Turin, Italy, in 1979, and his PhD in Genetics from the Rockefeller University, New York, in 1983. After postdoctoral training with Robert A. Weinberg at the Whitehead Institute/MIT in Cambridge, Mass., in 1987 Dr. Dotto joined Yale University, New Haven, Connecticut, as assistant professor of Pathology. In 1992 he was promoted to the rank of associate professor and soon after moved to Harvard Medical School, as associate professor of Dermatology in the newly established Cutaneous Biology Research Center. In 2000 he was promoted to the rank of Professor at Harvard Medical School and Biologist at Massachusetts General Hospital. In 2002 he accepted a position of Professor in the Department of Biochemistry at the University of Lausanne, while retaining his position of Biologist at Massachusetts General Hospital.  He has been elected to the European Molecular Biology Organization (2011), the Academia Europaea (2012) and the Leopoldina German National Academy of Sciences (2014). He is the recipient of a number of awards, including the American Skin Association Achievement Award (2012), an ERC Advanced investigator grant award (2013) and a Jurg Tschopp Award for Excellence in Biological Sciences science (2015).

Cancers do not arise solely from a single deregulated group of cells but rather as a combined result of various alterations in organ and tissue homeostasis. In fact, many genetic changes found in invasive and metastatic tumors are also found in apparently normal tissues and, for reasons that are not yet understood, only a minor fraction of pre-malignant lesions progress to malignancy.

Our main research focuses are on biological determinants of pre-malignant to malignant tumor conversion and on field cancerization, a process of major clinical significance that consists of multifocal and recurrent tumors that are associated with widespread changes of surrounding normal tissues. We primarily work with skin as an experimental system and look at Notch signaling as an entry point for understanding the complexity of cancer-determining signals.

As a parallel line of research, we have started exploring genetic and epigenetic determinants of cancer variability across gender and race. This is a topic of great interest as there are significant differences in cancer susceptibility between individuals of different sex and race that cannot solely be attributed to socioeconomic and behavioral factors and instead, are the likely result of an interplay with biological factors.

On the basis of the bad seed / bad soil hypothesis illustrated below, two main topics are being addressed : (i) intrinsic control mechanisms underlying the opposing balance between epithelial cell differentiation and cancer; (ii) role of underlying mesenchymal cells in control of epithelial tumorigenesis. 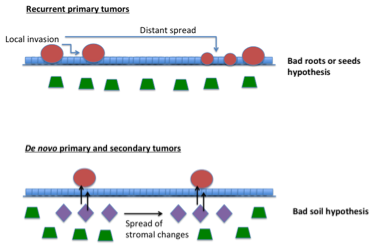 Field Cancerization : bad seed / bad soil hypothesis. Environmental insults, like UV irradiation or smoke, can target both epithelial and stromal compartments of organs such as skin, head/neck, lung, bladder or breast, with ensuing genetic and/or epigenetic changes. Establishment and spreading of “cancer fields” is the likely result of an interplay between epithelial and stromal alterations, with the latter playing an equally important and possibly primary role. The situation leading to multifocal and recurrent neoplastic lesions may be analogous to that of a bad plant difficult to eradicate.  This may be due to roots deeply embedded in the terrain or the spreading of bad multiple seeds, growing in the presence of a permissive or favorable soil. An alternative possibility with important conceptual implications is that the main problem is the soil itself. A bad soil could corrupt properties of otherwise perfectly good plants or seeds. According to this view, unless the soil is corrected, various forms of prevention and intervention would be of little or no use. 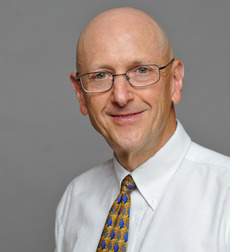