Andreas Mayer studied biology and chemistry at the University of Munich. In 1995 he obtained a PhD from the same university for studies on protein translocation into mitochondria in the laboratory of Walter Neupert. After postdoctoral studies on organelle inheritance and fusion with William Wickner at Dartmouth Medical School, Andreas Mayer joined the Friedrich-Miescher-Laboratorium of the Max-Planck-Society as a group leader in 1997. In 2003 the group moved to the Department of Biochemistry of the University of Lausanne, continuing its work on the mechanism of membrane fusion and on microautophagic membrane dynamics.

Our group studies how intracellular membranes fuse and fragment and how these processes are coordinated to regulate the copy number and size of organelles, using acidocalcisome-like vacuoles from yeast as a model system. We also explore how these organelles allow cells to maintain two key parameters for the energy supply to their metabolism, the cytosolic concentrations of inorganic phosphate and ATP.

Membrane fusion is required for vesicular traffic of proteins and lipids between organelles. In exocytosis it controls many vital processes, such as signal transduction among neurons, secretion of hormones or digestive enzymes, the abundance of sugar transporters, or the cytotoxic activity of T-lymphocytes. Also uptake and persistence of intracellular pathogens are closely related to vesicular traffic.

A key open question is how the proteins involved in these reactions perturb the structure of the lipid bilayers to drive them into fusion. We study the final, key events in this reaction, and explore how the four types of conserved factors that act in intracellular membrane fusion reactions - SNAREs, SM proteins, tethering factors and Rab-GTPases - cooperate to open the fusion pore. They need to provide mechanical energy to distort membranes and drive them through a hemi-fusion intermediate, in which only the outer membrane leaflets are fused, towards the formation of a fusion pore, which is generated as soon as both leaflets fuse. This last step is highly energy-demanding and we explore how it is driven and regulated. To this end, we combine in vitro biochemistry, reconstituting the fusion of isolated organelles in a test tube, with microscopic in vivo analyses and molecular dynamics simulation approaches (D'Agostino et al., Nature, in press).

Fig. 1: Steric effects of  SNAREs and SM/tether protein complexes on the site of hemifusion. Snapshots of coarse-grained molecular dynamics simulations of two hemifused membranes carrying a SNARE complex without (left) or with a globular structure of the size of the SNARE-binding region of the tether/SM protein complex HOPS. The right panel shows the system after the formation of a fusion pore. (D'Agostino et al., Nature, in press).

Membrane fission is the opposite reaction to membrane fusion. The equilibrium between these two antagonistic reactions may adapt the size, copy number and shape of an organelle. This is necessary to adapt its volume to changes in its lumenal content and prevent either lysis, or the loss of its membrane tension. But how this equilibrium is regulated by a cell is hardly understood. We explore this question with our favourite organelle, the yeast vacuole. It is an excellent model system for this question because we can modify its global content profoundly by manipulating its major constituent, inorganic polyphosphate (polyP). Our studies recently identified PROPPINs as a novel family of membrane fission proteins that act on various compartments of the endo-lysosomal system (Gopaldass et al., EMBO J., in press). We now try to understand how these proteins function on membranes. 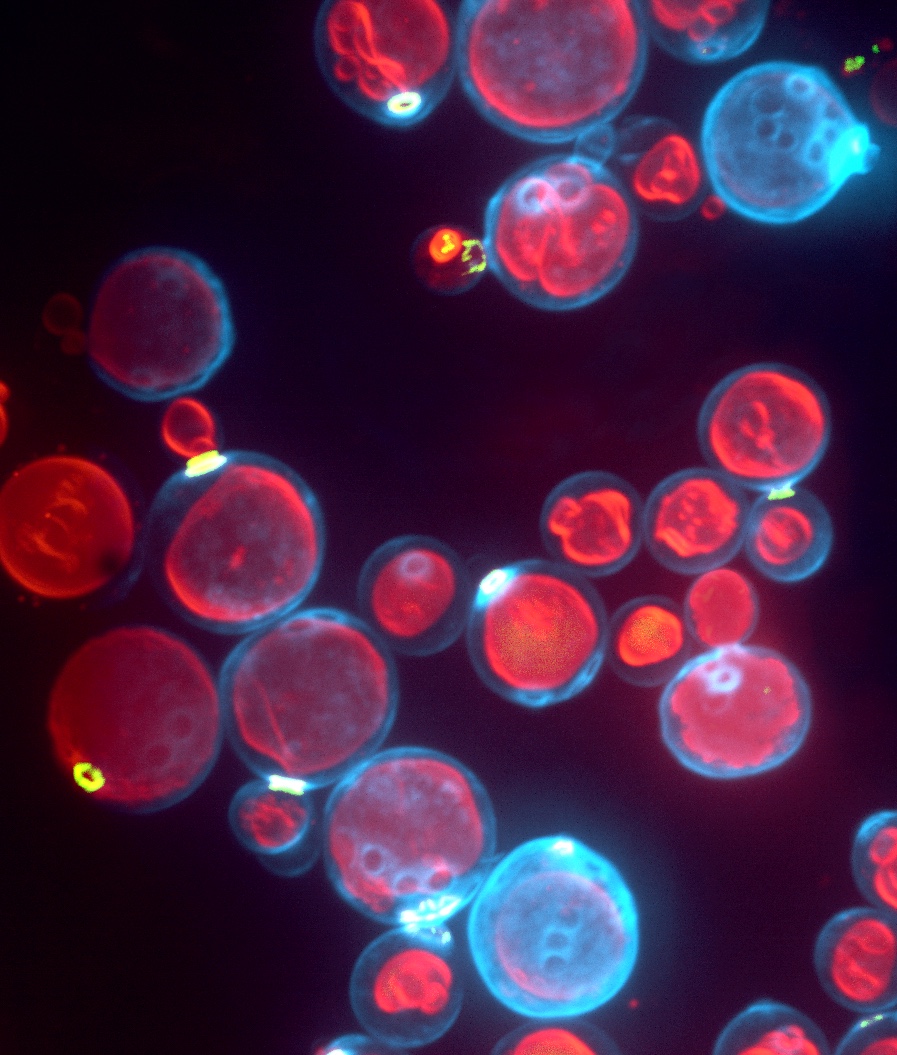 Fig. 2: Vacuoles in living yeast cells. Picture reconstructed from confocal sections. The cell walls are stained in blue, the vacuoles in red. Yeast vacuoles divide into numerous smaller organelles when their polyP is consumed and fuse into a single large organelle to maximize storage space for polyP when their phosphate supply is abundant.

2. Acidocalcisomes and the sensing and signalling of phosphate in the cytosol

Acidocalcisome-like organelles are filled with polyP, a polymer of dozens to hundreds of orthophosphate (Pi) units linked by energy-rich phosphoric anhydride bonds. PolyP occurs in all life forms. We identified the enzymes synthesizing and degrading polyphosphate and began to study their regulation and physiological roles (Hothorn et al., Science 324, 513-516) .

These studies led us to discover a novel and conserved mechanism for cytosolic phosphate (Pi) homeostasis in eukaryotic organisms. Pi homeostasis is of interest not only for agriculture, because Pi supply is limiting for crop yields, but also for medical purposes, because mutations in SPX domains lead to neurodegenerative diseases and may perturb Pi resorption in the kidney. Pi homeostasis is also of fundamental importance for metabolism and cell survival because high Pi reduces the free energy released by ATP hydrolysis, and thereby its capacity to drive biochemical reactions. In other words - excessive cytosolic Pi concentrations might bring important metabolic reactions to a halt.

We discovered that inositol pyrophosphates, compounds of so far poorly understood functions, communicate cytosolic Pi levels to SPX domains, a family of conserved protein modules of hitherto unknown function (Wild et al., Science 352, 986; Gerasimaite et al., ACS Chem. Bio. 12, 648). SPX domains bind or are linked many proteins for uptake, excretion or storage of Pi, or for transcriptional phosphate starvation responses. Our results thus provide evidence for a novel pathway dedicated to Pi sensing and signalling, and they identify SPX domains and inositol pyrophosphates as its first two elements. We now seek to elucidate this pathway entirely. 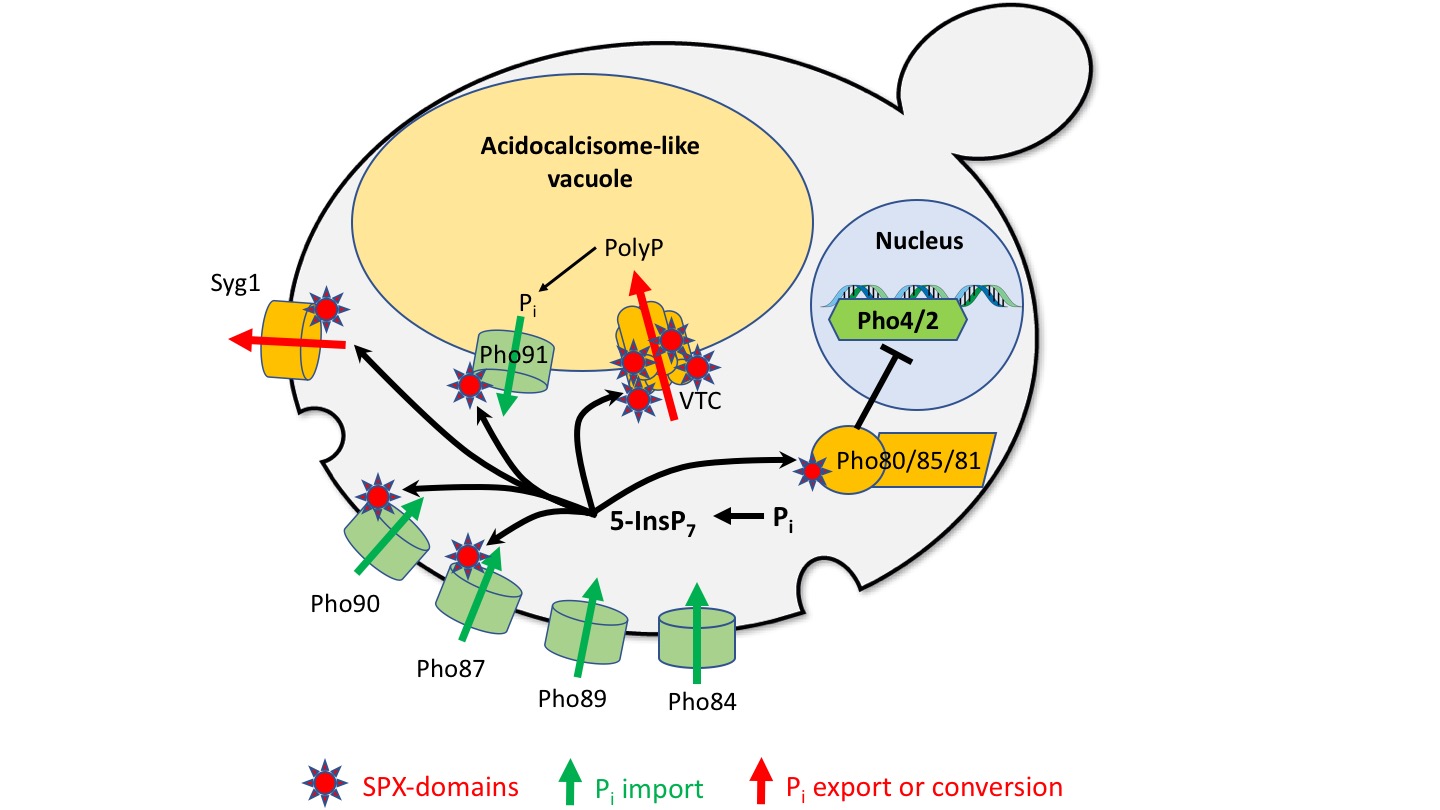 Fig. 3: Postulated system for Pi homeostasis in the cytosol, based on known components from S. cerevisiae.

Pi can be imported into the cytosol by high-affinity (Pho89/84) and low affinity importers (Pho87/90) and by a Pi-permeable vacuolar channel (Pho91). It can be exported from the cytosol by secretion into the extracellular space (Syg1) or by conversion into polyP and transfer into the acidocalcisome-like vacuole (VTC). Inside this organelle, polyphosphatases can re-convert polyP into Pi to make it available for export into the cytosol. A Pi-regulated kinase (Pho80/85/81) phosphorylates transcription factors (Pho4/2) for the transcriptional phosphate starvation response. A sensor for cytosolic Pi might regulate the levels of inositol pyrophosphates (e.g. 5-InsP7), which then act on SPX domains. These should, when bound to inositol pyrophosphates, inactivate proteins importing Pi and activate proteins exporting Pi from the cytosol. 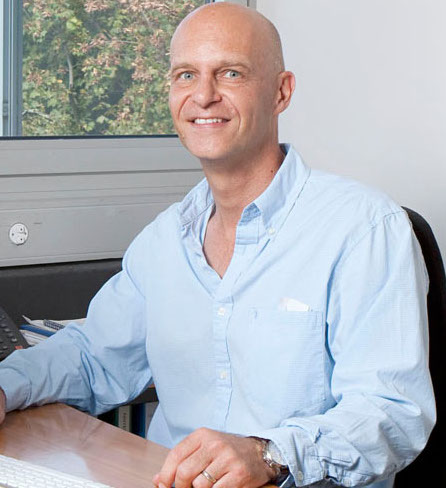