Hans Acha-Orbea studied biochemistry at the ETH in Zurich and received a Ph.D. in biochemistry in 1984 with H. Hengartner, H. Zuber and R. Zinkernagel. After a postdoctoral fellowship with H. O. MacDevitt at Stanford University in California, USA he came to the Ludwig Institute of Cancer Research, Lausanne Branch as an Assistant Member and START fellow in 1989. Since 1994 he had a joint appointment as an Associate Member at the Ludwig Institute for Cancer Research and Associate Professor at the Department of Biochemistry. Since 2008 he is Full Professor at the Department of Biochemistry. The main focus of his laboratory concerns research on dendritic cells with special interests in pathogen-host interaction, immune response and immune tolerance.

Dendritic cells (DC) are the key regulators of immune response and immune tolerance. In the absence of microbes and danger signals they induce immune tolerance towards presented peptides whereas after microbial infection they direct the immune response towards the infecting microbe. They can imprint the site of infection as well as the effector function required for elimination of the microbe on the responding T cells. Different subset of DC exist in mice with partly understood functions. Amongst the conventional DC the two major subsets are CD8+ and CD11b+ DC respectively. The former are more efficient at CD8 T cell priming and crosspresentation, the latter for CD4 T cell priming. Plasmacytoid DC are responsible for large amounts of type I interferon production immediately after pathogen encounter and later for antigen presentation. In addition several subsets of tissue DC such as Langerhans cells of the skin exist.

We have obtained a first model for human histiocytosis by overexpressing the SV40 large T oncogene specifically in DC using the CD11c promoter (2). Depending on the expression levels of the transgene in transgenic founders mice show DC transformation at 4 or 12 months respectively with full penetrance (Fig. 1 ). The forming tumors are all CD8+ DC and we were able to show that always mature splenic nonactivated CD8+ DC transform after about 3 months or 6-12 months in the two transgenic founder lines. The reason for this preferential transformation of CD8+ DC might lie in the higher steady state proliferation of this subset in normal mice. Despite the fact that Langerhans are thought to be at the origin of human Langerhans cell histiocytosis the non-Langerhans cell-derived CD8+ tumors in our mice show striking similarities to human disease. Tumors express high levels of Langerin as in human disease, a marker thought to be specific for Langerhans cells until recently (Fig. 1). These results raise the possibility that in a subset of human disease transformation/accumulation of conventional splenic DC might be involved. The tumors maintain most of the features of freshly isolated CD8+ DC such as cytokine production after Toll-like receptor stimulation, antigen (cross)-presentation and expression of specific transcription factors and surface markers. Stable cell lines can be easily derived from the tumors that maintain all the features of non-activated DC. These tools represent the first stable cell lines with the features of normal DC and are valuable tools for designing experiments to understand DC function.

Fig. 1: left: transgene construct. a) kinetics of tumor formation in high and low transgene expressiong mice. b) drop of hematocrit after tumor formation.  c) organs in litter mates (LM) and transgenic mice with tumors (TG). From these tumors, growth-factor-independent stable dendritic cell lines can be derived. d) Immunohistology for Langerin (CD207) expression in mouse and human disease. Reproduced with permission from Blood (2). We now can easily isolate stable, exogenous growth factor-independent DC lines from wild type, KO or transgenic mice. These lines keep all the tested features of freshly isolated CD8+ DC such as (cross)-presentation, cytokine production and upregulation of co-stimulatory molecules upon TLR stimulation. We have observed that these tumoral cell lines die by apoptosis within 40 hours after TLR stimulation. Using the cell lines we were able to quantitate pro- and anti-apoptotic molecules as well as effector caspase cleavage after activation by Western blot analysis. Similar effects were observed on wild type DC in vivo. Using KO mice for pro-apoptotic molecules we could define the pairs of pro-apoptotic molecules as well as cytokines required to induce apoptosis of wild type CD8+ DC. We also found that the cytokines produced after TLR stimulation are necessary and sufficient for induction of apoptosis in CD8+ DC (5, 6). We are in the process of generating models with transformed Langerhans cells and CD11b+ DC. In addition, we have lentivirally transduced DC lines to produce torlerigenic molecules in order to address the mechanisms of tolerance induction by DC in vivo and in vitro, We are also addressing the role of activation-induced DC death in induction of immune response and tolerance and in protection from immune pathologies in KO mice and DC lines.

During a T cell-mediated immune response, antigen-specific B cells become activated via DC-primed antigen-specific T cells to form germinal centers and develop into memory and effector cells (plasma cells). Plasma cells migrate back to the bone marrow where they compete for niches where their long-term survival is induced. In the absence of bone marrow homing, plasma cells are short-lived.

LATY136F mice show T cells with TH2 effector phenotype and function. They induce a hyper IgG1 and IgE syndrome when this linker cannot recruit PLCγ. When these effector T cells are mixed with naïve B cells in vitro they induce the same differentiation of B cells in an MHC and CD4-independent, cell-contact-dependent fashion. Amongst the co-stimulation molecules only CD80/86 but not ICOSL, CD40 are required for this effect. In vivo, in the absence of CD80/86 or CD28 the lymphoproliferation is not observed and CD40 KO mice make at later time points a hyper IgM and IgG1 syndrome (7). 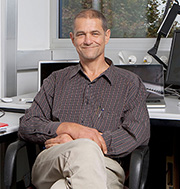