When an atom is bombarded by an electron beam, it can be more or less excited, and emit different radiations according to its nature and the intensity of the beam. This is how X-rays, secondary electrons, backscattered electrons or photons can be emitted. When the latter are in the visible range, it is called cathodoluminescence.

What is their utility in geology?

In geology, cathodoluminescence allows to have an image different from the one that can be obtained with transmitted light. The following applications are among the most common, although many others are probably just waiting to be discovered:

Terrigenous volcanic and metamorphic rocks and detritus:
Due to the very different behavior of minerals in cathodoluminescence, it's sometimes possible to easily distinguish two minerals that are usually very similar. Two plagioclases of slightly different compositions can thus give a very differentiable cathodoluminescence response. LC can also be used to highlight certain zonations, or to distinguish ghosts of recrystallized minerals. The habitus of certain quartz/feldspars in a breccia can also sometimes distinguish them from each other and determine their authentic or terrigenous origin.

Carbonate rocks :
Calcite and dolomite are easily differentiated in CL. Two atoms seem to play a major role in the intensity of LC. Mn has an activating effect and Fe is an important inhibitor. A small variation in the Fe/Mn ratio can therefore induce a difference in cathodoluminescence. As Fe and Mn are often found as impurities in carbonates, their low mobility allows us to still distinguish fossils, clasts or other phantoms, even in fully recrystallized rocks. The variation of the parameters of P°, T°, pH, Eh influencing the distribution coefficient of these two elements, the cathodoluminescence also makes it possible sometimes to specify the cementing history of a rock.

The best way to observe a rock in cathodoluminescence is with a thin, uncovered and polished blade. It is possible to make first tests without polishing but polishing is recommended, especially for photographs. The thickness is not important, but 30 microns is suitable.

Before putting the slides in the apparatus, be careful not to put your fingers on them and clean them with alcohol.

Show all Hide all
Galerie 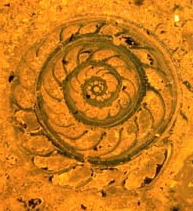