Video
This is a brand-new video about the performances of Nunuma masks in the small rural town of Kiere, in south central Burkina. It was recorded in June, 2016. This was recorded by Dr. Boureima Diamitani, Director of The West African Museums Program in Ouagadougou

Video
This is a video version of the very famous essay by Horace Miner titled “ Body Ritual Among the Nacirema.”

Video
This is a compilation of decades of video and film beginning with the early films by Marcel Griaule and Jean Rouch and including videos made very recently. It is lengthy and detailed, and shows details such as Marcel Griaule's funeral in the Bandiagara cliffs, and the most recent Sigui ceremony that very few people have seen before. There is ample
material about the elaborate stories of creation among the Dogon.

Video
I have devoted this website to recording as many videos about African art and performance as I can find. They come from countries all over Africa. I became interested in the subject when I discovered the vast quantity of excellent video available on the Dogon people.

Lien
I began this website to document and publicize the very large number of objects from Burkina Faso that were stolen from the National Museum in Ouagadougou between about 1975 and 1985. It has now morphed into a much broader website that includes a great deal of material by scholars in the United States, France, and Burkina Faso about the cultural life of the peoples of Burkina Faso.

Lien
This is the wonderful website that was assembled by Catherine Hale and Cory Gundlach based on the CD that I made almost 20 years ago. It is one of the most frequently visited websites in the world on African visual culture. It is sponsored for K-12 and postsecondary teachers by the National Endowment for the Arts. There are thousands of images based on scholars' field research, and thousands of images of African art objects in museum collections around the world.

- ‘Exhibition - Ancient Manuscripts from the Desert Libraries of Timbuktu. Exhibitions - Library of Congress’, 2010

- Slavery and the Slave Trade 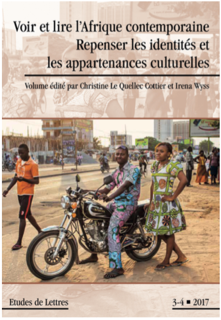